Love Island: Do Maura Higgins and Greg O'Shea have any chance of winning? 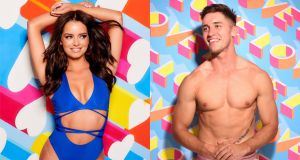 After this summer there are now two types of people: those who have fallen hook, line and sinker for Love Island, and those who can’t stop proclaiming that they haven’t seen a second of Virgin Media’s summer juggernaut but can still, somehow, tell Curtis apart from Greg.

And, whichever camp you’re in, surely the fact that two Irish contestants have made it to the final of the season’s biggest TV series is warming the cockles of your heart.

Let’s be honest. Greg O’Shea, the Limerick rugby player who is one of those finalists, is a lovely lad but too late a newcomer to truly earn viewers’ affections (although asking Jordan, when he found out about his toxic behaviour, “and what was your thought process behind that?”, like a true pass-agg pro, was a series highlight).

Mammy Higgins has Curtis pure sussed – not feeling him, in a word, but, like every other person with a pulse, heartily digging the man-mountain of loveliness that is Ovie

Greg has sailed through to the final as part of a late-onset couple with the firm fan favourite Amber Gill. (Viewers vote for their favourite couples, not their favourite individuals.) Poor Amber has been through the emotional wringer with Michael, who basically gave her the whole “new phone, who dis?” and dropped her once Joanna entered the villa, despite professing unending love for her. Luckily, Amber is, as best we know, really into Greg and his lovely Irish accent. So all’s well that ends well – a scenario that is pure catnip for viewers.

Yet pretty much since she walked into the villa with the assured gait of a seasoned drama queen, the Longford lass Maura Higgins has been credited with carrying the series on her perfectly tanned shoulders. Professing to be on Love Island for love (not in it for the Likes, swear), the grid girl has an admirable enthusiasm for coupling-ups and plain-talking downs. Lena Dunham and Amy Schumer reckon she’s their spirit animal. Even if, or maybe especially because, she has been coupled with the 24-carat drip that is Curtis.

Offering more buck-bang than producers could have ever dreamt of, Maura has been another firm fan favourite, although her star turn in the villa has seemingly not been without its problematic moments. Setting out her stall from the outset with talk of “fanny flutters” and the like, Maura has never been backward in coming forward when it comes to doffing her cap to a potential partner. Yet her advances towards Tommy and, later, her enthusiastic attempts to seduce Curtis (and ensuing huff when he turned her down, citing a headache) prompted some viewers to complain. One tweeter wrote: “Imagine the reaction if Curtis was having a tantrum because Maura wouldn’t have sex with him. Double standards.”

Then again, viewers might appreciate Maura’s dedication to bagging the prize: she reportedly missed her sister’s wedding in Ballymahon on Friday so she could keep her eye on the prize.

And last night even Mammy Higgins, who had somehow already made an impact on viewers despite having been referred to only in passing, finally made her own appearance, for “family day”. She looked for all the world like every Irish mammy you’ve ever known. All she was short of was saying how grand a day it was for the drying and sticking on an apron all the way from That Australia. Yet don’t let Sharon Higgins’s nicey-nicey appearance fool you: she has Curtis pure sussed (not feeling him, in a word, but, like every other person with a pulse, heartily digging the man-mountain of loveliness that is Ovie).

Curtis’s mother, for her part, appears to have mislaid the part of her brain that processes the pronunciation of two-syllable names. Are there no Mauras at all in Stoke-on-Trent? I only ask because much of Curtis’s interaction with his mam, Debi, ran thus:

Anyway. The end is near, and those pretending not to watch Love Island can breathe a sigh of relief, because after tonight they will have been liberated from a nightly schedule of sun, sea and sexism. There are – best-case scenario – 12 months of club appearances, #spon activity and a general wringing out of the proverbial 15 minutes. But not before a final hurrah under the villa’s ubiquitous fairy lights, where one of the surviving couples will sashay into the sunset with a potential £50,000 bounty.

I say potential because the prize money isn’t strictly a foregone conclusion, even if you are part of Love Island’s winning couple. After weeks and weeks of sexy musical chairs, the series ends on a bit of a climax: the couple whom the public vote their favourite are handed a card that reads Love on one side and Money on the other.

Here’s the juicy bit: if both parties choose Love they will split the prize money. Should one pick Love and the other Money, the one who picks Money walks away with the full prize. But if they both pick Money, they both leave empty-handed. All of which, of course, is likely to cast the R-rated shenans of the past few months in a whole new light.

Having hooked up early in the series, Molly-Mae and Tommy are one of the series’ “oldest” (and therfore most convincing) couples, yet Amber, Ovie and Maura, seemingly fan favourites, have carried on regardless of who has been hitched to their wagon.

Winning couples from the show’s previous series have cannily split the money, therefore greasing the way to a number of sponsorship deals, magazine spreads and the like. There is a first time for everything, although nobody is likely to want to spoil their sponsorship potential by becoming the money-grabbing villain, so that’s that theory out the window.

Right now, Tommy Fury and Molly-Mae Hague, with odds of 4/9, remain the favourites to win. Ovie Soko and India Reynolds clock in at 11/4, followed by Amber and Greg, at 9/2, with Curtis and Maura the current outsiders, at 25/1. (Irish viewers can’t vote, incidentally; that privilege belongs only to viewers in the UK, who watch the series on ITV2.)

Ovie, similarly, has stood out as a dreamy beacon of human decency, not least when pitted against the pack of blokes who carry on as though they’re still behind the bike sheds. It transpires too that Ovie has clashed with the boys more than once over their toxic “bro-bants”, which is likely to see him thrown a parade.

Tommy and Molly-Mae have been consistently devoted to each other, which in reality-TV-speak means “lethally, terminally boring”.

Such is the nature of Love Island that it’s almost impossible to predict what might happen tonight.

The old television that brought down one village’s broadband
9