No laughing matter as Miriam O'Callaghan gets the balance right

Presenter helms discussions on drugs and Boris Johnson, as Ivan Yates gets crash course on cocaine 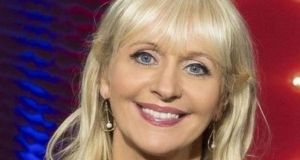 Miriam O’Callaghan shows that for all her famed one-on-one interviewing skills, she’s in her element hosting current affairs conversations.

A politician, a journalist and an academic walk into a room. To most people, this may sound like the opening line of a bad joke, but Miriam O’Callaghan, it’s a well balanced studio discussion panel. As she gets into the swing of her annual summer stint in Sean O’Rourke’s daytime slot (Today with Miriam O’Callaghan, RTÉ Radio 1, weekdays), the presenter shows that for all her famed one-on-one interviewing skills, she’s in her element hosting current affairs conversations. Much like the apocryphal Tipperary GAA official who ascended the county board despite having no interest in hurling or football, O’Callaghan has a particular talent: she loves meetings.

Tuesday’s programme sees O’Callaghan deploy her moderating skills to their fullest, as the prospect of Boris Johnson becoming British prime minister goes from outlandish fantasy to mind-boggling reality. But first she warms up by chatting with two English journalists, before talking to former Taoiseach Bertie Ahern about what lies ahead.

“We have to work with him, we have to get on with him,” says Ahern, who knows a bit about such tricky relationships: he refers to his “good” friendship with former Ulster Unionist leader David Trimble. O’Callaghan handles her guest well, apart from a momentary hiccup when she talks about the possibility of a Border in a hitherto unknown body of water called “the English ocean”.

But she gets back on track as guests from the political, media and diplomatic worlds discuss how the Johnson premiership might pan out. It has the potential to be a sprawling dronefest or chaotic bunfight, but O’Callaghan marshals her panellists. She allows everyone set out their stall, before quizzing them on standout points, such as asking former ambassador Bobby McDonagh if the Irish government should stick to the principle of the backstop.

Moreover, she keeps a firm hand on the tiller if conditions threaten to get squally, as when Conservative MP Edwina Currie gets offended after being upbraided by Fine Gael Senator Neale Richmond for being “ignorant” about the Border. Notwithstanding the fact that Currie suggests that the frontier arrangements already imposes barriers and that Ireland is being “bullied” by the EU, O’Callaghan allows her guest to respond, while curtly telling both parties not to talk over each other. It all leads to a stimulating and informed discussion, even though most of the predictions are upended the moment Johnson assumes office.

By way of levity amidst such gloom, O’Callaghan also helms a discussion about Ireland’s intractable and apparently worsening problem with violent drug gangs. Of course, it’s no laughing matter. The host hears from, yes, a politician (Social Democrats councillor Gary Gannon), a journalist (Nicola Tallant) and an academic (Niamh Hourigan), but once again the discussion is more informative and considered than one expects on such a charged issue.

This is largely because O’Callaghan gets the balance right with the panel. Gannon provides social awareness of local conditions, Tallant brings hardboiled reportage skills while Hourigan provides a coolly analytic take on the decline of Limerick’s criminal gangs. The host, meanwhile, gets in an uncharacteristically pointed dig at those who consume the “middle class drug” of cocaine as “people who say they’re vegan and worry about buying organic food, but don’t seem to care who’s being killed to get them their drug of choice”.

In the end, the panel agree that drug dealing is getting more violent, but are unsure of the solution. It’s refreshing to hear O’Callaghan’s views on the morality of recreational drug taking. She may be a moderating influence on guests, but there are times when she’s unafraid to speak her mind.

Ivan Yates is no stranger to the latter tendency, but he prefers to display his lesser-spotted inquisitive side when he discusses drugs on The Hard Shoulder (Newstalk, weekdays). As part of Newstalk’s snappily named “Cocaine Nation” strand, Yates has various discussions about the drug’s prevalence (an “epidemic,” according to reporter Barry Whyte) and how to deal with it: decriminalisation, David McWilliams tells the host on Wednesday.

Yates dutifully asks about these matters, but there is one aspect of the drug that he seems particularly curious about: its effects. “Such is my sheltered existence, I’ve never been offered cocaine,” he tells Whyte on Monday’s programme, sounding just a touch regretful. He goes on to inquire how the substance is ingested, how long the high lasts and how much it costs. All relevant questions, but ones which he asks again the next day, this time talking to Dr Garrett McGovern.

To be fair, it’s the health rather than monetary costs of cocaine that the host quizzes McGovern about. But while these are laid out in stark, non-sensational detail, there are also more surreal moments, involving the spectacle of two straitlaced, middle-aged male professionals discussing the nitty-gritty of drug use.

Yates inquires at length about the purity of the drug and whether it can be “diluted”, which makes him sound less like an interviewer than a prospective buyer. When the presenter asks if you “sniff” cocaine, McGovern swiftly corrects him. “You snort it,” he says, in the manner of Professor Higgins guiding Eliza Doolittle through an arcane point of etiquette. One half-expects the duo to start singing about the cocaine in Spain. In truth, such entertainment wouldn’t go amiss, given the cocaine series is underpinned by guilty pleasurable voyeurism as much as informative impulses.

If Yates seems fascinated by the alien drug culture, he is gobsmacked by political developments in London. As a former minister who normally affects world-weary wisdom on such matters, he says that Johnson’s doubling down on a hard Brexit strategy “beggars belief,” wondering whether the Tory leader truly thinks his swaggering confidence “make all realities disappear”.

He may not take drugs, but even Yates knows it’s a bad trip.

Radio Moment of the Week: Slaving away

Monday’s Morning Ireland (RTÉ Radio 1) yields a remarkable interview between presenter Gavin Jennings and Philip McAnenly of the Garda Representative Association. McAnenly recounts how 10 guards declined to travel to Jordan to interview Syrian refugees seeking asylum when they were informed they would not be paid overtime for working on days off there. It sounds like a legitimate grievance, albeit reasonably minor, but McAnenly’s outrage knows no bounds. “My own view is this is similar to how you would treat indentured slaves,” he says indignantly. Jennings gently rebuffs this lack of perspective, noting that the guards could refuse to travel. He might have added that unlike actual unpaid slaves, they weren’t physically punished and held against their will. Let my people go, indeed.