Love Island: Greg O’Shea is self-possessed, not a showboater. Your mammy would love him

Takeaway moments from eight weeks of sun, sea, sangria and snogging with benefits 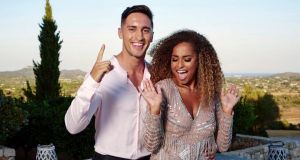 There are the “fenny fluthars”, and then there’s seeing Limerick’s very own Greg O’Shea busting out his moves in a tux, after reading a self. Penned. Poem.

“That perfect balance of honesty and sass / and of course we can’t forget about your gorgeous ass,” Greg intoned to Amber Gill as a nation swooned all over their sofas. After that double fanny – I mean, whammy – there wasn’t a male islander (not even Ovie) who got a look at that £50,000 prize. And so it came to pass that the Irish rugby player won the 2019 series of Love Island with his fan-favourite partner.

More’s the pity, we viewers were denied the chance to watch Maura Higgins romp to victory as half of the winning couple and then, with an almighty cackle, snaffle the prize money from under a moist-eyed, wibbly Curtis Pritchard. Nope, in the end we were robbed of such poetic justice – Maura saw her less-than-convincing romance shunt her into a rather anticlimactic fourth place – and true love won. Well, kinda.

Despite being a latecomer to the eight-week fandango – he had less than a fortnight to work on his tan – Greg had entered professing that he was a good boy, with decent morals and principles. It sounded deathly boring at the time, of course, but in the end he became an antidote of sorts to the toxic masculinity, chaaaaldish goings-on and juvenile pack mentality that made the reality show so grimily compulsive.

Even better, Greg seemed to genuinely like and respect Amber, with no ulterior motives lurking in the background. They appeared to have a laugh, and humour is a rare enough thing in the Majorcan villa.

If you reckoned Love Island was an unending succession of women calling out men for not treating them the way they deserved, you’d be dead right. Yet Greg was above all of this. He was himself, quietly self-possessed, with no need to showboat. Your mammy would love him.

Curtis couldn’t have been more slithery had he been drenched in cut-price sun shimmer. Which he could well have been. In any case, he very likely dented Maura’s chance of winning.

Will Greg be awarded the freedom of Limerick, and given a ride from the airport in an open-top bus? Either way, the starting pistol has fired for the race to secure all those lucrative sponsorship and media deals.

Maura will probably prove the show’s long-term winner in matters of the bank balance, if not in matters of the heart. Greg will return to preseason training for the World Rugby Sevens Series in Dubai in late August, so he’d want to get a wriggle on if he wants to get his #spon on. Yet social-media experts, factoring in her 1.5 million followers, reckon she could easily command up to €20,000 for a single Instagram post. (Yeah, how’s your morning commute going today?)

It may not have been the series ending viewers expected. After all, Molly-Mae Hague and Tommy Fury had long been the bookies’ favourites. But, still, this year’s Love Island has been a series with no shortage of takeaway moments.