The Handmaid’s Tale: The most searing episode of the season yet

Review: The third season of the dystopian drama is rising with dread to its end game 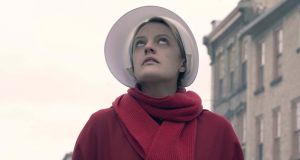 As the world burns, Trump tweets and Bojo cartwheels into Downing Street, it’s no surprise that dystopias are all the rage. But some are more dystopian than others. The most chilling surely is that presented by The Handmaid’s Tale. The gilded kingdom of Gilead is a near-future United States swept up in an evangelical fever dream. Under the eye of god, women are either chattels or window-dressing, men zealots, collaborators or corpses dangling from lampposts.

The Emmy-festooned drama, adapted from the 1985 Margaret Atwood novel, must of course be lauded for showing us where Biblical fury against an entire gender ultimately leads. It is, moreover, distinguished by a searing performance by Elisabeth Moss as June Osborne. She is reproductive serf, who in Gilead exists only to have babies (via ritualised rape).

And yet even the most devoted fan might quibble with The Handmaid Tale’s latter-day trajectory. Ever since the show moved past the plot of Atwood’s book, it has often seemed content to shudder to a standstill and spin its wheels in the misanthropy.

This week’s episode is surely the season’s most searing yet. Heroic is a dazzling psychodrama – a one-woman play that gives Moss license to plunge into the darkest depths and exorcise what she finds there. There are plenty of demons to go around. June’s moral compass has been in a tail-spin ever since fellow Handmaid and “walking partner” Ofmatthew betrayed her, making it impossible for June to contact her kidnapped daughter Hannah.

Ofmatthew (Ashleigh LaThrop) turned informer after a friendly Martha (Gilead’s denomination for a non-fertile woman) tried to help June contact Hannah. The child has been snatched from June to be raised among Gilead’s religious elites. A Martha on the inside promised an end to the nightmare.

But Ofmatthew blew the whistle and the Martha was hanged. June had her revenge when she let it be known that Ofmatthew had doubts about wanting to carry her unborn child to term. The situation escalated and the religious police shot Ofmatthew

Stricken, the Handmaid now reposes in a hospital ward. As the baby lives, the mother, her higher functions already shut down, must be kept alive at all costs. And as her designated companion, June is required to pray at her side. So it goes for weeks, then months.

June’s sanity soon threatens to come crashing in. She hums along to the bleeping life-support unit, fancying it is playing the melody of Belinda Carlisle’s Heaven Is A Place On Earth. And she lashes out at Serena Joy (Yvonne Strahovski). Inevitably, her on/off nemesis has been crowbarred into the episode and the two have their umpteenth face off. We are reminded the only thing The Handmaid’s Tale enjoys more than punishing June is dragging her into psychological cage fights with Serena.

The attack on Serena is covered up by a sympathetic doctor (who knew June’s mother in the Time Before). Not long afterward the baby is removed from Ofmatthew, who dies, and June is jettisoned back into the world beyond. There further suffering surely awaits. But the oppressiveness is diminished slightly by our knowledge that the show is built around Moss and that her character must be spared Ofmatthew’s fate. No matter what else happens the rules of the game are that June will endure.

The Music Quiz: What song did the BBC say was 'too depressing' to play
3

Collops and fíbíns: The lost language of Ireland’s landscape
7