Farage: The Man Who Made Brexit – The cringe factor reaches critical mass

TV review: The arch-Brexiteer is becoming a footnote in his own cruelly compelling story 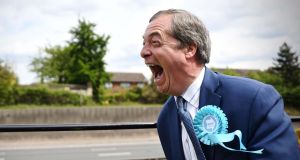 Nigel Farage: The Man Who Made Brexit gives the impression of a politician more than slightly detached from reality

It’s a strange sensation, feeling sorry for Nigel Farage. But such are the David Brent-style lows to which he sinks in Christian Trumble’s cruelly compelling Farage: The Man Who Made Brexit (Channel 4, Wednesday, 9pm) that now and then you are overcome by an unexpected twinge. Is it pity? Sympathy? Empathy? Best let it wash over and not dwell too deeply.

Farage, who is now 55, has been called many unkind things over the course of his long crusade to extract Britain from the tyranny of sensible food-safety standards and qualified-majority voting. Here the driving force behind Ukip and now the leader of the Brexit Party resembles a mutt that has fetched a stick only to be kicked in the face for his troubles.

Farage personifies a certain clubbable middle-class type, but between the cracks the documentary catches glimpses of a possibly more nefarious Nigel

He enters on a high, having just led the Brexit Party to success in last summer’s European elections. It is a dalliance in the sunlit uplands that proves all too fleeting as he is cold-shouldered by Boris Johnson and the Conservative establishment. Worse is to follow with his wipeout in last December’s Westminster elections, at which his party failed to win a single seat.

Farage comes across as a familiar archetype, and Trumble is sensible enough to get out of the way and let his subject be himself. He personifies a certain clubbable middle-class type – perfectly charming one to one, a good bloke with whom to share a pint. But between the cracks the documentary catches glimpses of a possibly more nefarious Nigel. There is his obsession with Dominic Cummings, the demon-whisperer in Boris Johnson’s ear. “That horrible little nasty man,” thunders Farage. Later he observes that the popular portrayal of Cummings as a Cumberbatch-as-Holmes-style genius is “just tosh”.

The antipathy is, one assumes, mutual. Farage, at any rate, is convinced that it is Cummings who is shutting him out of the corridors of influence. The arch-Ukipper is deemed beyond the pale, too toxic even for Johnson’s Conservative Party.

He doesn’t often come across as particularly nasty. The side of him on display on his final day in the European Parliament this week, when he waved a Union Jack as Mairead McGuinness switched off his microphone, is absent. Whatever jingoism he indulges in is kept off camera, which might be notched up as a failure on Trumble’s part. Surely he could have shown us something of Farage the manic Europhobe (with an EU passport).

On election night Farage blusters that the Tories will squeak by. Then, as Boris is barnstorming his way to victory, Farage adjusts his chin and insists this is what he predicted all along. He believes it too

Instead the impression is of a politician more than slightly detached from reality. On election night he blusters to Trumble that the Tories will squeak by with a narrow majority. When the fateful 10pm exit poll reveals Boris barnstorming his way to victory, Farage ruffles his nose, adjusts his chin and insists this is the result he predicted all along. He believes it too.

The cringe factor reaches critical mass in the final big set piece, when he is seated alongside Michael Gove, the Conservative MP, in a BBC studio and Emma Barnett, the programme’s presenter, challenges Boris’s bestie to thank Farage for all his work in bringing about Brexit. Gove demurs, and later Farage questions whether the grown-up Tory boy is even human.

There can be no such doubts about Farage, who is unmasked as vainglorious and deluded – someone who made history sway to his tune but already seems doomed to become a mere footnote in his own story.

Farage: The Man Who Made Brexit is streaming on All 4