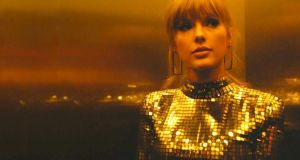 Taylor Swift in Miss Americana: ‘You get to the mountain top and look around and go, ‘What now?’’

Taylor Swift is not like other celebrities; she’s worse. She’s a liar. She plays the victim. She’s fake.

These are just some of the headlines from 2016 that mark the turning point in the singer’s popularity. In the year that #TaylorSwiftIsOverParty trended on social media and Kim Kardashian made Swift’s name synonymous with snake, she realised that by being the person people want her to be, there is little she can do if they want to hate her.

Miss Americana, directed by Lana Wilson, and streaming on Netflix, is the first documentary film about Swift, and it portrays an isolated existence. We see her go from being the golden girl of country, wearing ringlets in her hair and cowboy boots on her feet at the age of 15, to becoming a loved, loathed and inescapable pop phenomenon.

Eager to portray the homebody behind the superstar, Taylor Swift wants to stop living for approval, because, as she explains, one bad thing can cause everything to crumble

“Oh my God… That was all you wanted,” she recalls thinking in 2015 when she won Grammys for album of the year and best pop vocal album, for 1989. “You get to the mountain top and look around and go, ‘What now?’”

Then came the fall. Her niceness was portrayed as calculated. When she was silent about Donald Trump’s presidency she was warned not to be like Dixie Chicks.

As her love life became weekly gossip fodder, and her “squad” of supermodel friends flooded Instagram feeds, people grew tired of her omnipresence. So she retreated from public view for a full year – because she thought that was what people wanted.

For someone who “lives for pats on the head”, her failure to earn Grammy nominations in any of the major categories for her 2017 comeback album, Reputation, made her realise it wasn’t about the music any more. She had grown into something she couldn’t comprehend, and it broke her.

In Miss Americana, in every piece to camera shot in her New York apartment, her winged eyeliner remains flawless as her eyes fill with tears and she wonders who she is within the frame of being famous. When she’s not power-posing on stage or working in the studio, her default stance is sitting cross-legged in sweats with her cats. Eager to portray the homebody behind the superstar, she wants to stop living for approval, because, as she explains, “one bad thing can cause everything to crumble”.

In one of the film’s most unexpectedly honest scenes, she tells us that paparazzi photographs caused her to develop an eating disorder. “I get triggered by something – whether it’s a photo where it looked like my tummy was too big or someone said that I looked pregnant or something,” she says, “and that will just trigger me to starve a little bit, just stop eating.”

In her drive for perfection, she thought it was normal to feel as if she were going to pass out on stage from hunger.

Fresh out of an identity battle with herself, Swift now lives in a noticeably smaller world. The supermodel friends are gone, and the romances are now private

When she mentions that some stars can become frozen as they were at the moment when they become famous, there’s a sense that Swift has been infantilised for most of her adult life. Silenced by the guard she had to put up to thrive and then survive in the music industry, she then breaks down in tears to her mother about online comments and argues with her father, who’s trying to talk her out of tweeting her endorsement for Democratic candidates in her home state of Tennessee.

Another wake-up call sounded when she countersued a radio DJ for groping her at a meet and greet in 2013. During the subsequent trial, in 2018, she was stunned when she was asked: “Why didn’t you react quicker?” She learned that, even with seven witnesses and a photograph as evidence, not every voice is heard. It propelled her to finally speak up for others.

Fresh out of an identity battle with herself, Swift now lives in a noticeably smaller world. The supermodels are gone, and the romances are now private. This is the most candid that Swift has been in years, but in Miss Americana the recovering perfectionist draws a distinct line between what’s hers and what’s ours. Even if it’s still incredibly polished, your cynicism is likely to wane when you see there’s still an insecure human behind all that shines.