With family drama this riveting, the house restoration story fades into the background 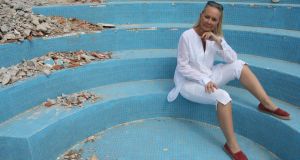 Eva Orsmond contemplates a future dip in the pool, Sunday night on RTÉ One

If the purpose of reality television is to show individuals at their most unguarded and emotionally raw – which it obviously is – then Dr Eva’s Great Escape (RTÉ 1, Sunday, 9.30pm) succeeds in spades.

Eva Orsmond is indomitable and scary in her professional capacity as weight-loss consultant and Operation Transformation regular. But she turns misty-eyed and trembly-lipped early in the agreeably fraught first episode of this three-part chronicling of her quest to open a health hotel in the Algarve.

The tears arrive as she reflects on how quickly her two sons have grown up and the extent to which life at full pelt leaves little room for romance, or even happy co-existence, with your significant other. Later, melancholy hardens to rage as her South African husband Wyatt Orsmond vetoes her proposal that they blow €120 on tat for the lobby of their new project.

She fumes, he tries to make light of it, while obviously pretty fuming himself. It’s like overhearing the neighbours having a raging row through the kitchen wall. A bit awkward, yes, but a guilty pleasure you clearly aren’t going to deny yourself.

Dr Eva’s Great Escape is everything Dreary Dermot’s Arid Adventures should have been. Instead of drawing the blinds on the messy emotional stuff, it leans into the turmoil as the Orsmonds try to flog their house in Wicklow and use the proceeds to fund their Portuguese dreams.

Eva and Wyatt briefly separated several months prior to filming. And despite 17 years of marriage, they are occasionally cagey around one another on camera. Dr Eva also admits to having been a strict mother. Meanwhile her two sons – whose bants-with-the-goys patter comes close to constituting copyright infringement of Ross O’Carroll-Kelly – delight in winding her up. It seems complicated.

As does Orsmond’s dynamic with her own mother. Dr Eva is moving to Portugal to be close to her ageing parent, already living here. But she admits that though they can get on like houses on fire, sometimes they simply melt one another’s brains.

When her mother arrives for a tour of the still tumbledown hotel, she doesn’t even try to conceal her unabashed horror.

Amid the familial angst, the restoration project fades into the background. As is standard in these shows, the initial budget is over-optimistic. And, naturally, nasty surprises present themselves along the way, such as the bombshell that half the complex is unstable. Yet these architectural obstacles are mere side-servings, rather than, as was the case on Dermot’s Home the entire main course. The human drama remains focal throughout.

Did I cheat by googling “Dr Eva’s hotel” and learning it is due to open later this year? (don’t judge me – you did so too).

Not really, because Dr Eva’s Great Escape isn’t about bricks and mortar (and overpriced tat). It is about her marriage, her relationship with her children and with her mother.

In that regard, and unlike the decrepit building she is trying to knock into shape, the programme is built on solid foundations.

The Year Without Summer: a vision of climate upheaval seen through the past
7

The Invisible Man review: Tenser than Christmas at the in-laws
10