TV review: Did the people who get up early in the morning stay up late to watch this? 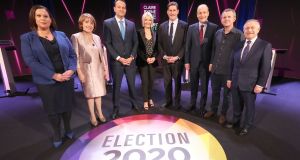 Seven leaders stand in a row at podiums looking like they’re at the starting line of the world’s most tedious Segway race. RTÉ assembled them here at NUI Galway, much like Yul Brynner assembled the original Magnificent Seven.

Last week’s Virgin Media debate with just Leo Varadkar and Micheál Martin was more like a Butch and Sundance situation, in which their confidence-and-supply bromance shone through. Now the twins are standing with five other leaders wondering, “Who are these guys? Why do they get to speak?”

There’s a preamble from the host, Claire Byrne, about who’s willing to go into coalition with whom, that reminds me a little of Abbott and Costello’s “Who’s on first?” routine. Sinn Féin will talk to anybody. Fianna Fáil and Fine Gael won’t talk to Sinn Féin. Labour want a left-wing alliance. Solidarity/People before Profit want a left-wing alliance but not necessarily with Labour.

There’s a bit of bickering. Mary Lou McDonald says Fianna Fáil and Fine Gael are arrogant for ruling Sinn Féin out as coalition partners. Leo Varadkar says Sinn Féin are “soft on crime and high on taxes”. Micheál Martin puts Sinn Féin’s resistance to the Special Criminal Court in the context of “old Provos”. (Whenever a blow lands on Sinn Féin, I feel like Leo and Micheál want to high five one other but cannot for appearances sake.)

A young woman in the audience asks what the different parties will do to ensure the younger generation can afford to buy a house. Micheál Martin promises 50,000 affordable homes and an SSIA scheme for first-time buyers. (“It sounds a little “back to the future”,” says Byrne.)

Labour’s Brendan Howlin says that rents should be frozen. (This gets a round of applause.) Leo Varadkar notes that he doubled the amount of housing from 10,000 in 2016 to 21,000 last year; in the jaws of a housing crisis this does not sound as impressive as he clearly thinks it is.

The Green Party’s Eamon Ryan favours European-style cost-rental schemes (where rents charged pay for the provision of public housing). Mary Lou McDonald wants to build 100,000 homes. Róisín Shortall says the Government needs to build on public land and criticises Fine Gael’s tendency “to leave the responsibility for the provision of housing to the market”.

Micheál Martin starts talking about the failures of the previous years and the need for serious change. Mary Lou McDonald points out that if he wanted change, he could have removed support from Fine Gael at any time over the past few years. There’s a round of applause and Micheál Martin looks hurt. It’s so unfair of her to bring up his actions.

Leo Varadkar says that public housing is very important but they also need homes for people who want to buy. Around the country, the ears of people who get up early in the morning prick up at this dog whistle. He speaks about his record since becoming leader of Fine Gael. Micheál Martin says, “You were in government for nine years. You can’t just divide and pretend you didn’t exist for the previous seven years.”

Varadkar responds and I hear the words “troika” and “the mess Fianna Fáil made”.

This reminds Richard Boyd Barrett that both of their parties voted against Bills he proposed to amend the Constitution with a right to housing and to stop property speculation and land hoarding. This gets another round of applause. If I didn’t know any better I’d think Galway was a hotbed of red sympathy.

A man called Frank asks about whether rural Garda stations might be reopened. There’s a general waffly consensus about the need to increase community gardaí and also a widespread agreement that the closed stations can’t be reopened.

Richard Boyd Barrett criticises cutbacks to the drug task force and local youth projects. Róisín Shortall mentions the importance of resourcing the Criminal Assets Bureau. Eamon Ryan talks about the need for a Portuguese-style healthcare approach to drug use rather than criminalisation.

Claire Byrne asks Leo Varadkar about own his admission of youthful drug use. “I’ll try to avoid the long pause this time,” he says, referring to the last debate where this issue came up. Everyone laughs. Then he says he largely agrees with Eamon Ryan on the drugs issue, which must be annoying for Eamon.

A woman called Phil asks what the parties have to offer middle-income earners like herself. “Tell her what she’ll get,” says Claire Byrne, as though she’s hosting a giveaway gameshow.

Brendan Howlin says that people need to be honest, and that the healthcare and housing crises can’t be fixed without a decent tax base. Róisín Shortall’s answer accords with this. No tax cuts from either, so Phil shakes her head with disapproval.

Leo Varadkar tells her about how he’s raising the threshold for the top rate of tax to €50,000. (The ESRI has said this will lead to more inequality, Claire Byrne notes.) He whips out his dog whistle again. “People who get up and go to work every day, I believe after all these years you deserve a break.”

Micheál Martin says that Leo’s promises can’t be trusted, saying that several years ago Fine Gael promised to abolish the universal social charge then did not do so. They argue. Then Mary Lou McDonald says, “Listening to these men, you’d never imagine that one had crashed the economy and the other is so fiscally irresponsible he’s producing the most expensive hospital in the world.”

Richard Boyd Barrett raises the need to properly tax corporations, and Eamon Ryan says that the State needs to support international proposals for setting minimum levels for such companies.

Leo Varadkar sticks his hand up again to says that he thinks you can have tax decreases and increased public spending. He argues that we can have our cake and eat it, and he looks really pleased with himself.

Then a man named Seán asks about climate change and whether the leaders support the reduction of the suckler herd. This is Eamon Ryan’s time to shine. He speaks passionately about the need to tackle the climate crisis and how the State needs to support Irish farmers in changing their practices to this end.

Everyone else ultimately agrees that farmers need to change but that they need to be supported. Fianna Fáil and Fine Gael’s environmental policies largely amount to: “Lord, make me climate friendly, just not yet.”

Finally, there are statements from each leader. Eamon Ryan stresses the need to think long-term about housing and healthcare in the context of an endangered environment. Brendan Howlin criticises the big parties for looking to the private sector to solve the nation’s problems and he promises honesty.

Leo Varadkar is the first to thank Claire Byrne for moderating the debate, which no doubt annoys the others something rotten. He says that it doesn’t matter what anyone else is promising because only Fine Gael can manage the economy.

Micheál Martin wants us to dwell on how ineffectual Fine Gael has been and he wants us to do so without remembering the other party (what’s their name again?) who basically kept them in power. It’s a bit of Jedi mind trick and it nearly works on me for a minute.

Richard Boyd Barrett tells us that we have a historic opportunity to end the domination of Fianna Fáil and Fine Gael. Róisín Shortall poses a series of questions asking why workers can’t afford a decent house and why children are in hotel rooms. Mary Lou McDonald says we have “the right to a good and decent life” and that the “old politics… have failed”.

And then it’s all over. Claire Byrne was very good, stirring things up when she smelled blood and scolding when everyone spoke over each other. The best performer was, unexpectedly, Richard Boyd Barrett, who landed his punches clearly and with reference to his own party’s policies.

Brendan Howlin was good but he felt a little overshadowed by the clarity of the further left, as did Róisín Shortall, who got the least airtime. Mary Lou McDonald was consistently strong. Eamon Ryan was impressive on the environment and on drug policy.

Micheál Martin and Leo Varadkar were basically shadow boxing with their own records in government. Were the people who get up early in the morning even watching them? Probably not. The debate was on very late.

But don’t worry, the rest of us heard it every word, and soon it will be up to us to choose a government.