Week three review: Voting public needs to look itself in the eye after booting out Biala 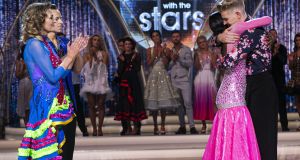 The moment Love Islander Yewande Biala was voted off Dancing with the Stars. Photograph: Kyran O’Brien

You can cut the tension with Nicky Byrne’s quiff as ex-Love Islander Yewande Biala becomes the first contestant eliminated from Dancing with the Stars 2020. She flunks out having been criticised by for her “lumpy and bumpy” Viennese waltz. And it’s true that she is in little danger of setting the floor alight on her second outing in the show.

But surely the great Irish reality TV voting public needs to look itself in the eye after booting her out over the even less elegant Fr Ray Kelly.  He earlier makes history by scoring the first ever one out of 10 on Dancing with the Stars Ireland. He gets to stay while Biala goes home? It’s a decision which, you suspect, will be debated for quite some time.

Tears, palpitations and stifled cries of anguish have already rung out. And that’s just me making it through Byrne and co-host Jennifer Zamparelli’s opening monologue. And then down to business with the celebs dancing for their literal survival in the series.

First up is former Miss Universe Ireland Gráinne Gallanagh dancing a “fun jive” – here I quote the RTÉ press release – to Meghan Trainor’s Dear Future Husband. She is accompanied by pro partner Kai Widdrington and also by an Elvis impersonator and Vegas wedding chapel (bask in the chintzy twinkle of your license fee being put to good use).

“I would have liked a little more energy, but a groovy start,” says judge Loraine Barry. “A great start to the show,” agrees Julian Benson. She scores 20.

She is followed by Kilkenny hurler Aidan Fogarty who, dancing with Emily Barker, performs a foxtrot to Oasis’s Half the World Away. He also jumps over a cabinet – something we need more of on Dancing with the Stars.

“A leading man’s foxtrot – your core usage, your frame, was sublime,” enthuses Julian Benson. Brian Redmond critiqued Fogarty’s “flat” left arm but praised his legwork. “This is probably one of the best foxtrots from a male celebrity on the show.” He receives a stonking 23.

Then it’s Michael Carruth’s big moment as the Olympic boxer returns following an injury last week. Incidentally, my spellcheck keeps changing his name to “Michael Carrot”. It makes me yearn to see Carruth dancing dressed as a giant orange root vegetable. I want it, you want it, I bet Michael wants it too. Make it happen RTÉ.

“Michael’s hips are very stiff. He does look like a da at a wedding,” says his dance partner Karen Byrne. But, making entrance via tent, he survives his samba to Tom Jones and It’s Not Unusual. “I know you’d never hit a man with glasses,” says Brian Redmond, winding up for thumbs down review (“the middle is alright”). “There were pockets of samba,” says Julian Benson, trying to be kind. He scores a not unusual 11.

Biala is next for what will turn out to be her final pirouette. She is accompanied by pro Vincent and Taylor Swift’s Lover. Is that a Love Island wink? Or does Biala just really like Taylor Swift? We may never know.

“A very lady-like Viennese waltz,” says Benson, who urges her to watch her “flow”. “Clumpy, lumpy and bumpy,” is Redmond’s take. She lands with a thud at the bottom of the leaderboard with 10.

Early frontrunner Sinéad O’ Carroll then gets another opportunity to shine. She treats us to a Paso Doble to El Gato Montes by Arielle Dombasle.

“I felt I was at the bull fight – I was there,” says Julian Benson. “I loved your floor-work.” Brian Redmond describes her as “practically perfect”, though he suggests one of her arms may be longer than the other. She roars into the lead with 24.

O’Carroll’s easy confidence is in contrast to the early nerves displayed by presenter Glenda Gilson. She and Robert Rowinski. dance a waltz to I Never Loved a Man by The Commitments. It’s a big improvement on her debut. She hasn’t crashed and burned just yet, as her score of 15 confirms.

Another slow starter is Fr Ray Kelly. His cha cha cha with Kylee Vincent features a bizarre cameo from comedian Des Bishop, who happens to be watching from a couch.

“Father, I don’t know what to say,” says Julian Benson. “You moved – there were pockets of the cha cha cha in there.” He’s trying to be kind. “I’m not a huge fan of the faffing about at the start,” says Brian Redmond. “You’re killing me – I’m looking for something positive.” He scores a desultory six, including, from Redmond, a first ever one. Curtains soon for Kelly surely?

The tempo is heightened as Ryan Andrews tangos with Giulia Dotta to Billie Eilish’s Bad Guy. Andrews did well first time out and excels again here. “Tango-tasatic,” says Julian Benson. “We saw that a bad boy we were looking for.” “Timing to perfection… excellent tango,” adds Loraine Barry. He reaches second place with a score of 23.

They are followed by Lottie Ryan and her contemporary pro-partner  Pasquale La Rocca. Their choice of song – somebody’s choice of song anyway – is Castles by Freya Ridings. The singer’s father is the voice of Daddy Pig on Peppa Pig which has nothing to do with Dancing on Stars but is a random fact I’ve been dying to share.

The curtain is brought down by the double-whammy of Mary Kennedy doing a salsa to Ran Kan Kan by Luis Lema and Brian Dowling, whose American Smooth is accompanied by Dance Monkey by Tones & I.

Kennedy received a harsh review from Brian Redmond in her first appearance. She had promised to raise the tempo with a steamy Latin dance. And she certainly gives it her all (though she does knock over a glass on the fake salsa bar RTÉ has installed).

“You put a bit of chic into it tonight,” says Loraine Barry. “It was vastly better than last week,” says Redmond. People in the background are chanting “Mary! Mary!” as if we’re watching the Montrose’s answer to the Hunger Games. She receives a much-improved score of 16.

Dowling, for his part, has a hoot voguing with professional Laura Nolan. “I loved this concept,” says Redmond, referring to the opening in which the dancers pose as mannequins. “I’m very impressed with your foxtrot,” says Loraine Barry. He walks away with a score of 20 (though Byrne initially thinks it’s 19).

The heightened stakes make for riveting two hours of prime-time panto. And your heart obviously goes out to Biala, turfed off two reality shows within six months .She has devoted the past several weeks to paso dobles, waltzes and pretending to laugh at Zamparelli’s zingers and none of it can have come easily. Now her time is done. It’s a sad adieu.

But if it’s any consolation, this is the final week she will have to stare at Nicky Byrne’s quiff and Julian Benson’s brocade and doubt the existence of god (“There is no light, only the void,” I imagine Benson’s wardrobe person whispering shortly before opening credits). It’s not much, but it is something.