TV review: A programme about Thomas Markle: is as tawdry as you might imagine 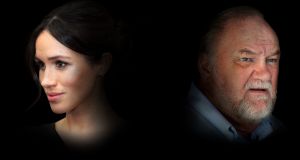 Meghan Markle and her estranged father Thomas: ‘I’m not all the trashy things that are being said about me,’ he insists

The ongoing three-ring circus that is the House of Windsor is surely in danger of putting Peter Morgan’s The Crown out of business. How can mere television compete with the real-life drama convulsing the royals as they have bounced between the Prince Andrew scandal and the Sussexes’ hard Megxit to Canada?

But if Harry and Meghan hoped moving to North America would draw a line under their participation in this soap opera, they had reckoned without the UK’s Channel 5. Last year, it tracked down Meghan’s estranged father, Thomas, for a feature-length conversation at his home in northern Mexico.

Thomas Markle: My Story was broadcast in Britain last week and now comes to Virgin Media (Sunday 10pm), and it is every bit as tawdry as you might imagine. Just by watching you are left feeling slightly complicit in the campaign waged by elements of the British media against Meghan and Harry.

Thomas at one point actually likens his predicament to the bereavement his son-in-law suffered with the death of Princess Diana.

“Harry, knowing what his mother went through, should be really concerned with what is happening to me,” Markle tells production company Alaska TV, which has previously treated us to such erudite delights as Doing Drugs For Fun and Young, Dumb and Banged Up in The Sun.

He also makes it clear that he hopes the interview – for which he is being paid – will rehabilitate his image. “I want everyone to know that I’m not all the trashy things that are being said about me.”

Markle and his daughter haven’t spoken since he notoriously posed for paparazzi shots in Mexico in which he appeared to be swotting up on Britain and losing weight for the imminent royal wedding (which he did not attend). The pain he feels over the rift is palpable.

He talks about holding his infant daughter after she is born by C-section and begins to weep recalling his hurt at seeing Charles leading her up the aisle. Markle acknowledges, too, that he may never again have direct contact with Meghan or Harry. He comes across as resigned to that – sad but accepting.

Yet if he is speaking from the heart, it’s clear his wallet is an additional consideration. “It’s time to look after Daddy,” he says at one point. “For what I’ve been through,” he continues later “I should be rewarded.”

What daughter could hear those words and not want to flee half way across the world?