The vote was carried by 621 to 49; scenes included Brexit Party leader Nigel Farage clashing with chairwoman Maireád McGuinness over waving Union Jacks - and after the vote was passed, the chamber rose to sing Auld Lang Syne. Video: EU 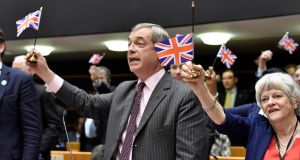 MEPs in Brussels overwhelmingly endorsed the Brexit withdrawal agreement on Wednesday evening, giving a clear go-ahead to the departure of the UK from the EU on Friday night at midnight Brussels time.

The vote was carried by 621 to 49, the final stage of the ratification process which now only has to be signed off formally on Thursday by the European Council.

Once it leaves on Friday the UK will enter a transition period until the end of December, during which the two sides will try to reach a trade agreement.

In a debate tinged with sadness and emotion over Brexit, a handful of UK remainer MEPs, including Northern Ireland’s Naomi Long, appealed unsuccessfully for a No vote, pledging that they would fight to return to the EU.

Sinn Féin’s Martina Anderson, also representing the North, said she would vote for the agreement, which although “an ugly compromise” was better than a hard border on the island of Ireland.

He taunted European Commission president Ursula von der Leyen with Boris Johnson’s “courageous” promise not to contemplate a “level playing field” in the upcoming trade talks – the idea that the UK would need to maintain common regulatory standards with the EU.

“Britain is too big to be bullied,” he said.

Deputy speaker McGuinness cut off his microphone, telling him: “Sit down, put your flags away or take them with you if you’re leaving now.”

Once the vote was passed, the chamber rose to sing Auld Lang Syne as members embraced departing British colleagues.

The debate focused less on the withdrawal agreement and more on the future relationship talks, with Ms Von der Leyen again putting down a marker on the critical importance of regulatory alignment between the EU and UK.

“We will not expose our companies,” she said.“The more the UK does to uphold our standards, the closer and better the access to the single market.”

She pledged in particular to ensure that the commitments made in the withdrawal agreement on citizens’ rights and on the Irish protocol were implemented. And, in speaking of her regret at the UK departure, Ms Von der Leyen quoted George Eliot: “Only in the agony of parting do we look into the depths of love.”

The leader of the European People’s Parliament group, Manfred Weber, insisted that although the timeframe for trade talks is tight, the EU “need the best agreement, not the quickest”.

Proposing the vote to approve the withdrawal agreement resolution, former Belgian prime minister and chair of the parliament’s Brexit steering group Guy Verhofstadt, insisted that the reasons advanced for Brexit were fundamentally flawed. The loss of sovereignty, he said, was a feature of the age we live in, the power of multinationals, of China and the US.

“Europe is just the way to regain that sovereignty,” he said.

Fine Gael MEP Seán Kelly said he was asked by many in Britain to vote against the agreement. “My heart said yes, my heart, no.” Young people in the UK did not want to leave, he said, but their time would come. “We’ll welcome them back,” he added.

Alliance MEP Naomi Long said she would vote No. “We are not accepting Brexit now,” she said. “While Northern Ireland may withdraw, people in Northern Ireland will not withdraw the hand of friendship.”

Speakers from the British Lib Dems, Scottish National Party and British Labour also said they would vote No.

But the overwhelming mood was of a reluctant Yes, to allow what chief negotiator Michel Barnier called “an orderly withdrawal”.

He said, in remarks clearly aimed at Mr Farage, that the challenge was to be European “in addition to being a patriot”.

“Europe boosts our own national patriotism,” he said.

Fianna Fáil’s Billy Kelleher, the party’s only MEP, voted for the Brexit deal, three weeks after telling Tánaiste Simon Coveney in a letter that he could not vote for the agreement over concerns that the rights of Irish/EU citizens in Northern Ireland could be diluted after Brexit under the agreement.

“In all conscience, I cannot vote for an agreement that is so vague and leaves it open for a dilution of citizens’ rights into the future,” said Mr Kelleher in his January 8th letter.

Mr Coveney has said that “regardless of what Boris Johnson has said”, Brexit “will involve checks between Great Britain and Northern Ireland” when the Brexit transition period ends later this year.

The Minister for Foreign Affairs said that Ireland needs to prepare for checks on goods travelling between Ireland and Great Britain after the UK leaves the EU’s trading rules later this year.

Although the UK leaves the EU on Friday, it will continue to observe the bloc’s rules until the end of the year.

He said that committees need to be set up to discuss how to manage the new arrangements and new infrastructure will be needed “to make this a reality” and make sure that the North continues to observe EU rules as provided for in the withdrawal agreement.

All this, he said, will be very challenging, and the next Government will have to work with the Stormont administration to implement the new rules in a way that “doesn’t stoke divisions and tensions.”

Fine Gael ministers sought to focus attention on Brexit on Wednesday with warnings that severe economic turbulence may lie ahead if the UK leaves at the end of the year without a trade agreement.

“If Brexit goes badly, all will change,” the Minister for Business Heather Humphreys told a press conference on Wednesday, while the Mr Coveney said that Brexit is “coming at us like a freight train whether we like it or not.”

The Minister for Finance Paschal Donohoe added that the “train is picking up speed.”

Asked why Brexit had not become an issue on the campaign trail, Mr Coveney replied that “People are fed up of it . . . But we don’t have the luxury of being fed up about it.”

He said that while to date the election campaign had been about public services, he expected that people would begin to focus on the threats of Brexit, especially after the UK leaves the bloc on Friday night.

Mr Coveney denied that he had made personal attacks on the Fianna Fáil leader Micheál Martin. Last week, Mr Coveney said he knew Mr Martin “better than most people” and that he was not the person he wanted to see leading Ireland into the next phase of Brexit - provoking an angry response from Fianna Fáil.

On Wednesday, Mr Coveney said that he only wished to contrast the experience of Taoiseach Leo Varadkar with Mr Martin, and give his view that Mr Varadkar was better equipped to handle the next phase of Brexit. Additional reporting: PA