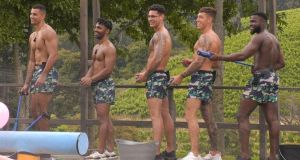 Love Island: I am grateful for all the words that have been spilled about this show, as it is impossible to make head or tail of it without them

Love Island, recently and hauntingly described in a South African paper as a show that “recruits men and women in their early 20s to live in isolation under permanent video surveillance”, is filming its first “winter season” in my city, Cape Town, in a big angular house with a strong conference-venue energy.

According to the UK tabloids, which are always ready to say many implausible and racist things about the dangers of even setting foot in South Africa, the location of the house is a “staunch secret” so as to ensure that the isolated recruits of Love Island don’t get kidnapped by gang lords.

This is a lie. The location of the house is no kind of secret at all – it was on the news here. It’s in the middle of the Constantia winelands, near a property owned by the Gettys. The violence choking parts of Cape Town is real; the suggested threat to the Love Island contestants is not.

The women become bigger and cleaner and shinier as the episodes go by, the men becoming smaller, more rumpled and dusty. And why are the beds all in the same room?

A lot has been written about Love Island. There has been commentary on its extraordinary popularity, and speculation about the reasons for that popularity (people are sad, they are weary), backlashes against its popularity, various grievances and shakily formed cultural criticism. Some people will say that in attempting to use Love Island to make some sort of point about society, we are doing nothing more than playing ourselves.

I will not be one of them, however. I am grateful for the incredible amount of words that have been spilled about this deranged show, because it is impossible to make head or tail of it without them. A South African can’t just start watching Love Island with no preparation. There’s something about the impenetrable Britishness of it – the way the contestants seem like they are somehow nine years old and 1,000 years old at the same time. The women becoming bigger and cleaner and shinier as the episodes go by, the men becoming smaller, more rumpled and dusty. Drinking out of colourful plastic wine glasses. Wearing tiny clothes that I have never seen in any shop. Why are the beds all in the same room?

This is all very fresh, obviously. If I were a longtime Love Island watcher, my sense of it as breathtakingly weird would have become stale. I would laugh when the cast members say things like, “Even though he’s a policeman, he’s very beautiful in the face,” or, “There’s no reason to believe you can’t find love and friends” – but I wouldn’t keel over with laughter. I would cope.

It’s all very new to me, though. I’m only watching because it’s being filmed in the city I live in, and it seems important to be supportive. Capetonians are good at this: we will watch an entire season of Homeland just because it was filmed in the city. We will sit through some rubbish Sean Penn has churned out because we saw him driving up and down Kloof Street a few times. I feel a very real fondness for Lily Allen for the simple reason that I once saw her smoking a cigarette with great concentration on the terrace of a restaurant I sometimes go to.

I have the same sense of affection for the Love Island contestants – I wish them all the best with whatever it is they think they are doing in that depressing villa, with its drawings of emojis on the walls and its air of fathomless, empty stillness – a condition that persists even – especially – when everyone is moving around and talking.

The rest of the world does not necessarily feel like this: viewing figures are down for the first time ever, although they’re still remarkably high. Various reasons have been put forward for the drop – public loathing of the guy with the little red cheeks who loves hunting being one of them. I have my own theory: it’s the wind.

The cast members have a problem, you can tell, but they don’t know what that problem is. It’s the Cape Town wind, which exists to remind us we were put on this earth to suffer

It’s very windy in Cape Town at the moment. It has been debilitatingly, life-ruiningly windy for some days. It’s always like this in summer for at least some of the time, but it feels especially vicious this year. Every summer we find ourselves making apologetic faces whenever we encounter yet another spindly German tourist standing on a traffic island, wrestling with a map that is bucking and flapping in their white-knuckled grip like a terrible wild animal. We worry about them every year; and now, as if we do not all have enough on our plates, we worry about the Love Island contestants too.

If you look closely, you can see the wind on the show. You can see it in the ruffling of the water in the overly chlorinated swimming pool, or shaking the tiny pointy leaves of the indigenous shrubs that the producers are desperately trying to frame as vaguely tropical. You can see it in the air of discomposure on the faces of the cast members. They have a problem, you can tell, but they don’t know what that problem is, or where it comes from, or why it is happening to them. It’s the wind. The wind exists to remind us that we were put on this earth to suffer.

What must they be thinking, up there in the villa, trying to pretend they’re having a good time while the wind claws at the French doors and rattles the bedroom? Would it make them feel better to know that if and when this season tanks, it will not be their fault, but the fault of the wind alone? – Guardian

Love Island in on Virgin One and ITV2 at 9pm; Rosa Lyster is a writer who lives in Cape Town

Independence and the shadow of home rule: the legacy of the Irish Parliamentary Party
9