TV review: The Irish singer was like a Johnny Cash who knew his way around a Massey Ferguson 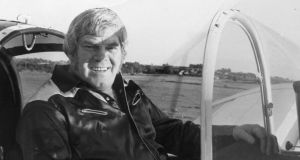 Big Tom: Cloch le Carn paid tribute to McBride as both performer and stalwart of his community. Photograph: Tuam Herald/RTÉ

Nowhere else in the world could have produced a star such as Big Tom McBride. The country singer with the endless sideburns played football for his county and maintained a collection of 18 tractors. He did so even as he cut chart-topping LPs in Nashville and, so we are told, once performed to an audience of 80,000 in London. He was Johnny Cash if Johnny Cash had grown up in Monaghan, was nifty under a high ball and knew his way around a Massey Ferguson.

His is a quintessentially Irish story, then, and is done justice by the Irish-language documentary series Cloch le Carn (RTÉ One, Tuesday, 7pm). Even those too young to recall first hand the showband era – most of the population by now – will be passingly familiar with McBride’s music and with his singing voice, at once booming and heartfelt, folksy and sorrowful. So the doc quickly pushes past all that and instead chronicles his career and what it meant to Monaghan. Remarkably, it does so in 30 minutes without many corners cut.

McBride’s humility is a recurring theme. He was astonished at the idea of a statue in his honour – the very statue that today stands proudly in Castleblayney

Country-music luminaries line up to give praise. Fr Brian D’Arcy recalls that, on a bad night, Big Tom could draw a crowd of at least 1,500 almost anywhere in the country. Susan McCann explains how her song Big Tom Is Still the King catapulted her to the top tier of Irish country rock, even as it made McBride blush. Aisling McBride-Duffy, Big Tom’s daughter, remembers a family man without airs or graces, apparently untroubled by the demons that often haunt musicians.

McBride’s humility is a recurring theme. He was astonished at the idea of a statue in his honour – the very statue that today stands proudly at the bottom of Main Street, Castleblayney.

The only shadow is that cast by the false allegation that this devoted father had a child with a fan. The resulting court case collapsed when the woman withdrew her allegation. On the steps of the courthouse, McBride and his wife, Rose, hold back tears. They would die within months of one another in 2018.

It’s a rare flash of melodrama in a documentary that sets out to do just one thing but does it well: pay tribute to McBride as both performer and stalwart of his community. Sex, drugs and rock’n’roll don’t get a look in. As ambling social history, however, it ticks all the boxes.