Ryan Tubridy ponders positives to the crisis, a ‘corona bounce’ as he puts it

He assures us he can broadcast from home. Some may not see that as an upside 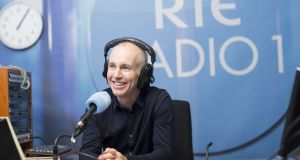 Ray D’Arcy: on Tuesday he spoke to an Irish woman living in the Chinese city of Suzhou, who describes everyday life in the country as it tries to control the virus. Photograph: Patrick Bolger Photography

It’s a sure sign that things are serious when scheduled programming is interrupted by special bulletins. But these are challenging times, and so it comes to pass on Tuesday, when the Ray D’Arcy Show (RTÉ Radio 1, weekdays) breaks from its usual chatty format to cover a matter of vital importance. “I would love to talk to you more, but we have to go to Cheltenham, unfortunately,” D’Arcy says ruefully, before switching over to commentary on the big race of the day at the English festival.

As the coronavirus crisis turns the world upside down, this equine interlude could charitably be viewed as a reassuring instance of life going on as normal. But given the grim scenarios that otherwise overshadow the week’s radio, the racing commentary merely comes across as perverse, as the host’s palpable lack of enthusiasm underlines.

That the Cheltenham coverage forces the host to curtail an unusually fascinating conversation about Covid-19 only adds to the sense of cack-handed disconnect. D’Arcy has been talking about Kathy, a Wexford woman living in the Chinese city of Suzhou, who describes everyday life in the country as it tries to control the virus.

As Kathy tells it, the situation there is marked by people showing patience, humour and civility, rather than descending into a Mad Max-style free-for-all. The scariest thing in her account is her description of the prevalence of WeChat, a messaging and payment app so prevalent in Chinese life as to make Big Brother look like a furtive Peeping Tom. D’Arcy, alive to the Orwellian ramifications, asks his guest if the Chinese state “runs” WeChat. Kathy doesn’t know, but cheerily adds that “everything here is pretty much connected”. One senses the host would like to further discuss this altogether different dystopia, but has to make way for the sacred gee-gees. No wonder he sounds frustrated.

He’s not the only one. On Wednesday, Ryan Tubridy (RTÉ Radio 1, weekdays) voices his mystification at Cheltenham being allowed to proceed, before going on to mock the supposed “Churchillian” spirit invoked by some defenders of the decision. “Did you ever hear such . . . balderdash in all your life,” Tubridy splutters, catching himself before using another B-word.

He berates those Britons, frequently of a Brexiteer stripe, who constantly harken back to the second World War at times like this. “It’s a virus, Dunkirk was a war,” Tubridy says. In a saner era, this would qualify as a statement of the obvious, but we are where we are.

Either way, the coronavirus situation appears to have energised Tubridy. His opening monologues, usually marked by a contented drollery, have a tad more vim as he riffs on sundry topics, only to invariably return to the main subject to hand. He also seeks out good news, talking to an Irish resident of Singapore on how the city-state has to date contained the virus. Tubridy even ponders if there might be some positives to the crisis, a “corona bounce” as he puts it, such as getting stuck into unread books if he is quarantined. In such an eventuality, he adds, he’ll be able to broadcast his show from home: “The show goes on, in that regard.”

Some uncharitable souls may not view the prospect of Tubridy staying on air as an upside, but he has other survival tips should people need to self-isolate, such as playing old board games. “These are the things that are going to get us through,” he says. He makes it all sound a bit of a wheeze rather than a global health emergency, right down to his freshly-minted term for the coronavirus, “the passing unpleasantness”. As a pandemic name, it may lack the memorable ring of “the Black Death”, but can’t be faulted for optimism. Still, it beats invoking the Blitz.

There’s no sugarcoating the situation on Today with Sean O’Rourke (RTÉ Radio 1, weekdays). “We’ll be talking to undertakers after the break,” the host says as he goes to the ads on Tuesday, a catchphrase that hopefully won’t be replacing “a word from our sponsors” any time soon.

O’Rourke goes on to talk to undertaker Keith Massey about proposals that people who die of Covid-19 will be buried or cremated without any funeral service, lest any virus still in the deceased’s lungs infect more people. O’Rourke presses his guest on whether such restrictive measures will be necessary, characterising the scenario “very upsetting”. Disrupting our way of life is one thing, but preventing funeral rituals in Ireland is a step too far.

O’Rourke is in sunny form when he interviews Minister for Finance Paschal Donohoe, citing pessimistic predictions that up to 80,000 people could die. “How could any system not be overwhelmed by the possibility of death on that scale, without wishing to be alarmist about it,” the host says, setting off klaxons across the country. Donohoe responds with his customary salvo of meaningless buzzwords – “clarity”, “honesty”, “challenges” – before saying that Ministers are “doing all we can to get ready for what might come”, a promise which leaves the listener even less reassured than before.

As with D’Arcy and Tubridy, O’Rourke’s most telling conversations are with people at the epicentre of the outbreak. He talks to Florence-based writer Miriam O’Callaghan (no, not that one) and Milan-based teacher Jamie Lynch. O’Callaghan’s descriptions of her Italian home as a “ghost city” are stark enough, but an even more ominous portent arises when Lynch tells the sport-mad host that training sessions for the Milan GAA club look unlikely. A chastened O’Rourke mournful that a similar cloud hangs over sporting tournaments here. If cancelling sporting events is the worst that happens, we’ll be doing well. And they’re off!

On Tuesday’s edition of The Hard Shoulder (Newstalk, weekdays), it comes as no surprise to learn that Ivan Yates is a “meat and two veg” man in culinary tastes as well as bluff manner. So he’s gleeful at an academic study finding many restaurants’ vegan options contain high levels of salt and saturated fault.

But as he interviews vegetarian restaurateur Deirdre McCafferty, it becomes clear the foods aren’t from typical vegan venues, for instance, McDonald’s and Papa John’s pizza chain.

As McCafferty says high salt levels are common in all processed food, Yates gets to his real point. “Is there not an essential truth, that your butternut squashes, tofu, and cauliflower are all pretty tasteless and you need a bit of salt to get the flavour going?” Given he’s a broadcaster able to spice up the blandest items, Yates maybe missed his calling as a vegan chef. But in terms of dissing vegan food, it’s a fruitless endeavour.