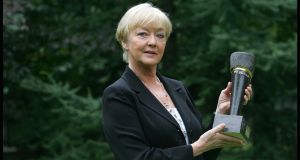 Marian Finucane was born in May 1950 and grew up in Glasnevin, Dublin. Both her parents were from Ballydesmond in Cork: her father was a garda, her mother a teacher.

One of six children, she attended secondary school at the all-Irish Scoil Caitríona in Glasnevin and did her Leaving Certificate at 16. Her mother considered her too young to go to university and so she was sent as a boarder to St Louis Convent school in Monaghan, an experience she hated.

She began studying architecture in Bolton Street in Dublin. Among the first public images of her were as a student occupying a Georgian building on St Stephen’s Green in Dublin in protest at their destruction.

In 1971, representing Bolton Street, she became the first woman to take the best individual speaker title in the annual Irish Times debating competition.

A chance meeting with broadcaster John O’Donoghue at a party led to a dramatic change in direction from her course of study. He suggested she might apply for a position in RTÉ. After a few failed attempts she was hired as a continuity announcer in 1974.

Her next break came thanks to producer Eoghan Harris who chose her as the co-presenter of a books programme, Paper Chase. She then worked as a reporter on the current-affairs programme Day by Day on RTÉ radio.

Her career would be spent in RTÉ except for a short spell in the 1980s when she edited a current-affairs magazine called Status. By now a household name, among the programmes she presented were Saturday View, and a number of pioneering programmes directed towards women, both on television and radio.

On radio, Women Today was central to the development of the women’s movement and began broadcasting at time when abortion was a criminal offence, there was no access to over-the-counter contraception and divorce was still more than 15 years away.

“We had a ball. We were always in trouble,” said Finucane in a later interview with The Irish Times. “It sounds almost medieval now, but if you did anything on reproduction or marriage that wasn’t exactly in tune with the Roman Catholic Church’s line you’d get slaughtered.”

By the early 1990s she had established herself at the helm of Liveline, the phone-in programme she made into a huge brand in what had previously been a moribund afternoon slot. She also presented the high-profile television programme Crimeline, later to become Crimecall.

She won the Prix Italia broadcasting award for a 1979 documentary, Abortion: the Lonely Crisis, which followed the experience of a young Irish woman travelling to England for a termination.

She and her husband John Clarke have a son, Jack – who will be 30 this year, but their daughter, Sinéad, died at the age of eight in 1990 of leukaemia. Finucane found it very hard to talk about the death or her daughter even many years later. In a 2013 interview, she said: “It never goes away. I have the height of respect and admiration for people who have been bereaved and who can talk about it. I just blubber.”

She received several offers from rival broadcasters but stayed with RTÉ, by which time she was one of its highest-earning presenters. By 2009, when her career was at its peak, her salary was more than €500,000 per year but in more recent years it was about €300,000.

In 1999, she left Liveline to replace the retiring Gay Byrne with the daily Marian Finucane Show on RTÉ Radio 1. She moved to the weekend slot in 2005, where she presented a two-hour programme on Saturday and Sunday mornings.

The format for the programme remained largely unchanged. There were more human and personal items on Saturday, and a current-affairs focus on Sunday, with a panel of guests and a thorough review of that morning’s papers. Her style of interviewing was conversational and inquisitorial rather than combative, although she had a strong current affairs instinct and did not shy away from asking tough questions.

Beyond her familiar throaty voice, her skills as a broadcaster were immediately evident. One of her most memorable interviews was a poignant conversation she had with her close friend Nuala Ó Faoláin, who had discovered she had terminal cancer. Giving the eulogy to Ó Faoláin at her funeral in 2008, she said that before the interview Nuala had been “very distressed and distressing” but that listeners had responded with a wall of goodness.

Another of her celebrated broadcasting moments was in a different vein, when in 2001 she interviewed then minister of state Joe Jacob shortly after the 9/11 terror attack. It concerned Ireland’s preparedness for a nuclear or terrorist emergency. Clearly not briefed to respond to any meaningful questions, it turned into a “car crash” as the hapless Mr Jacob was unable to say how the authorities would respond or how people would get anti-radiation iodine tablets.

Finucane and her husband were heavily involved in charity work with hospice organisations (in memory of Sinéad); with Concern and with projects in South Africa.

The couple, whose home was in Co Kildare, established the charity Friends in Ireland after a visit to South Africa in 2002 where they witnessed the devastating impact of HIV and Aids, especially on orphaned and vulnerable children. Their first project was to build a hospice in Cape Town and the charity expanded to embrace other projects and hundreds of Irish and South African volunteers became involved to help construct hospices and dozens of centres for children and their families.

She was awarded an honorary doctorate by NUI Galway in honour of her charity work.

In the same Irish Times interview, she was asked if her commitment to the charity stemmed from her own experience with family tragedy.

“I suppose it makes a difference if you’ve been through something like [that] and also because it was to do with hospice care. Any family in Ireland which has been touched by hospice care doesn’t forget it lightly.”