As videos spread, calls for citizens to show support across Europe at noon on Friday 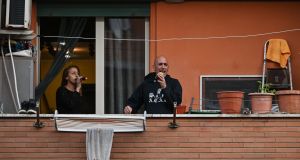 People sing, wave and clap their hands, during a flash mob “Una canzone per l’Italia” (A song for Italy) at the Magliana district in Rome. Photograph: Andreas Solaro/AFP via Getty Images

First it was the Italians singing arias from their balconies in a series of musical flash mobs. Now the French and Spanish have been publicly applauding their healthcare workers in a show of appreciation for health heroes at the frontline in the fight against coronavirus, and they have been sharing the results on Twitter.

As Europe is increasingly locked down, the displays of human spirit and community solidarity have heartened and strengthened people.

Citizens in France opened their windows last night at 8pm to applaud medical personnel trying to hold the line against coronavirus, or Covid-19. There are plans for a nightly show of appreciation.

In Spain, too, videos have circulated of citizens applauding medical and health workers there and all over the world fighting the virus.

#applause for the medical and health workers of Spain ...and for the entire world for fighting covid-19 pic.twitter.com/0Bwuu3Huf9

This morning, @wemoveEU, a citizens’ campaign, called for people elsewhere in Europe to make similar gestures of solidarity and appreciation. “On Friday 20th March at 12:00 noon, go to your door or window or balcony and clap, shout, sing, bang pots, ring bells. We want to make lots of noise to show our appreciation for all those incredible health workers, without whom we would not have a fighting chance against the coronavirus!

“In Italy, Spain and Portugal people have already come out in thousands to show solidarity and thanks to health workers. Let’s keep up the applause and show the world that all of Europe is united! Join & spread the word! #applause”.

Last week Italians began singing from their balconies, with singers – and musicians and DJs – entertaining their neighbours and keeping spirits up during lockdown. Daily balcony concerts have become a display of resilience and solidarity.

While quarantined in Florence, Maurizio Marchini stepped out on to his balcony and sang to the entire town.

There are balcony concerts and a flashmob of applause “for all Italians who are contributing for the good of Italy”.