I Am Patrick on Netflix isn’t even slightly tacky. How disappointing

The acting is good, the academics informative, the narration measured. What a letdown 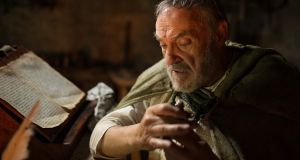 The last thing an American Evangelical retelling of the story of St Patrick should be is boring. Especially when it stars Gimli from Lord of the Rings – AKA Jonathan Rhys-Davies – as our national snake-banisher in chief.

Yet that somehow is where we find ourselves with the Christian Broadcasting Network’s I Am Patrick, which comes to Netflix ahead of a limited cinematic release in the US.

The biggest disappointment is that it’s crushingly competent and not even slightly tacky. In an alternate universe, I Am Patrick would feature St Gimli of the Four-Leaf Clover looking the Pagan Celts in the eye and telling them, “you have my Crozier!”

There would also be iffy CGI serpents and lots of tattooed warriors screaming down the Hill of Tara in the manner of shoppers who’ve spotted a virgin aisle of loo-roll. Not here alas.

Instead – and I can’t emphasise how massive a let-down it is – this is simply a slightly plodding beginner’s guide to Paddy the Proselytiser. It has been very sensibly shot in Mayo, Galway and Clare rather than a soundstage in Atlanta or Vancouver and the budget seems decent with only the occasionally slightly iffy wig to suggest we’re not quite at the Game of Thrones level.

The cast are largely Irish, too, and the accents won’t have you spitting radioactive snot as your head rotates 360 degrees like that kid in the Exorcist. That said, it is a bit jarring when Patrick, in the brutalised slave stage of his career, has a run-in with a Celtic warrior who appears to be doing an impersonation of the young Ronnie Drew.

“Gowaaaan,” the Celt growls, indicating that Patrick should take the high road “Gowaaaan.”

But then Patrick (played as a young man by Robert McCormack, with Rhys-Davies as the Saint in his elderly years looking back) casts his eyes to heaven and mouths a quick prayer. And presto, Fifth Century Ronnie Drew has a change of heart and offers Patrick passage on his boat.

There’s a catch though. Patrick must “suck his chest” – Scary Celt’s, not his own – to prove his fealty, as was the fashion at the time. For a moment it looks like we’re about to plunge into an over-flowing green river of hokeyness.

Devastatingly, Patrick instead offers up ANOTHER prayer – God really should put a limit on these, like the Genie and the Lamp – and chest-sucking is off the menu.

Experts parade by like American majorettes down O’Connell Street on March 17th. We are introduced to Dr Tim Campbell director of the Saint Patrick Centre in Downpatrick, and Dr Charles Doherty and Dr Elva Johnston, both of UCD. Weirdly, many of the funniest lines are from the stony-faced academics.

“Roman Britain’s view is that Ireland was a place of barbarians at the end of the world,” says one, leading you to wonder if by “Roman Britain” they mean “Boris Johnson and Dominic Cummings”. “People thought his mission was crazy – that the Irish were beyond redemption,” says another, who was possibly stuck in the same queue as me at Aldi on Wednesday.

Plot-twists are at a minimum. There is a surprise appearance by St Brigid (Ailbhe Cowley), who presents herself to St Patrick (portrayed in his middle years by Vikings’s Seán T. Ó Meallaigh). You briefly hope they’re going to team up like Vision and Scarlet Witch in Avengers and blast the Celtic warlords with laser-guided novenas. But no – she just goes off for a quick prayer instead.

The danger that you might actually learn something is present throughout. Did you know Patrick wasn’t the first Christian missionary to Ireland? Me neither. Or that he confessed to his best friend Felix (yes, he had a best friend and his name was Felix) about a terrible act he committed in his youth and of which he vowed never to speak again. We don’t know what this was: my guess is writing the lyrics to Ireland’s Call.

There’s even a hint of Game of Thrones-style murder and pillage when Young Patrick is set upon by hairy ne’er do wells from times past. The acting here and elsewhere is competent, the talking heads talky, the narration by Moe Dunford measured and informative. What a shamrock-shaking letdown.