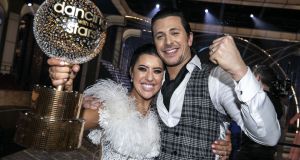 Lottie Ryan and her pro dancer partner Pasquale La Rocca have been crowned winners of Dancing With The Stars 2020 in a surreal final that takes place without a studio audience because of the coronavirus pandemic.

“I actually have no words . . . this journey has been the best thing I have ever said ‘yes’ to,” says the 2FM presenter after she is awarded the Glitterball Trophy by public vote. “Getting to meet these people – it has been life changing for me.”

The grand decider was originally to be held next week. But, to ensure the well-being of dancers and crew, RTÉ decided on Sunday to bring forward the finale by seven days and dispense with the semi-final.

The absence of an audience obviously impacts on the atmosphere. Ryan, Ryan Andrews, Gráinne Gallanagh and Aidan Fogarty stomp and swirl in an empty studio, the only accompaniment a smattering of applause from the cast of pro dancers.

There are echoes of Friday’s equally uncanny Late Late Show. There Ryan Tubridy channelled Alan Partridge minus the laughs when showing us how to wash our hands and then spoke to a studio audience that consisted of handful of RTÉ luminaries seated metres apart. It was like a Beckett tragicomedy about the end of the world.

“It really puts everything into perspective. I hope we gave an enjoyable performance,” says Gallanagh of the unusual circumstances in which DWTS is bowing out. “It’s not ideal . . . ,” says Forgarty “But we danced our socks off.”

“It’s great that we’ve got a final – we really turned this around today,” says DWTS creative director Darren Bennett, again replacing the poorly Julian Benson. “We had some of the best dances of the season tonight.”

It goes without staying that this is an unwelcome new frontier for DWTS. Yet credit must go to contestants and crew for soldiering on. There hasn’t been much to laugh about recently. Dancing with the Stars very briefly allows us to close the shutters and forget, as far as is possible, the scary world beyond.

That said, there are one or two queasy moments. As if a global epidemic isn’t enough to contend with, Dancing with the Stars has to chuck a spanner in the works by introducing a new “trio-dance” round, in which the celebs hoof with – can you guess? – two dancers. This is . . . strange. Just how strange becomes incredibly clear as ex-hurler Aidan Fogarty swings Emily Barker around his neck and Laura Nolan his torso, all to the strains of Pitbull. It’s Human Centipede: In Da Club edition.

“It was just legs and heads and arms!” says presenter Nicky Byrne, who sounds both envious and slightly terrified.

Fogarty is first on the floor, though initially it’s just him and Barker. They dance a Viennese waltz to Another Life by Westlife. Later they return for that deeply curious salsa to Pitbull’s I Know You Want Me (Calle Ocho), for they are joined by eliminated pro Nolan.

“It felt amazing . . . a bit surreal with no audience, the adrenaline does get to you,” says Fogarty.

“This was just pure beautiful Viennese waltz,” says Loraine Barry. “That was a just sublime.”

“You looked like you were having the night of your dreams,” says Redmond, referring to the human centipede salsa.

“This is by far the hardest show we’ve done in the four seasons – they do say, dance like nobody’s watching. Your Viennese waltz was beautiful to watch,” says Bennett. Fogarty scores 26 for the waltz and and 27 for the human centi-salsa.

Then it’s Ryan Andrews of Fair City, with freshly shaved chest, and pro partner Giulia Dotta. Their first dance is a samba to Lo-Lo Dzama’ by Šum Svistu. Their second, featuring Karen Byrne, is an American Smooth to I Get A Kick Out of You by arch-smoothie Michael Bublé.

“Nobody deserved to home tonight, everyone deserved to be in the final,” says Andrews of the last minute switch-up from semi to final.

“You brought that brilliant rhythmic feel,” says Brian Redmond. “It takes a really great dancer to show us those small musical nuances.” Andrews scores 29 for this samba and 30 for the American Smooth.

Next it’s frontrunner, favourite, and eventual winner Lottie Ryan, with pro partner Pasquale La Rocca. They do an elaborate old-school quickstep to Lady Gaga and Tony Bennett’s duet of Don’t Mean A Thing If It Ain’t Got That Swing. Later on, they rope in pro Ryan McShane for a three-way cha cha cha to Turn Me On by Riton x Oliver Heldens.

“Exceptional,” says Brian Redmond. “They say the devil is in the detail . . . You looked like an absolute angel.”

“Lottie the hotty . . . the trio is not always easy,” says Loraine Barry of Ryan’s closing dance. Lottie scores a perfect 30 for the quickstep – and then does it all over again with the cha cha cha.

Gráinne Gallanagh and Kai Widdrington are last out of the blocks with a foxtrot to Harry Styles’ Falling. As follow-up, the couple, plus Stephen Vincent (wearing his pyjamas), do a Charleston to – a bit close to the bone, no? – Dance Apocalyptic by Janelle Monáe.

“There’s no one here and I couldn’t hear you on the floor...that footwork... it was all there,” says Loraine Barry.

“We’ve all fallen for you this season,” says Darren Bennett.”You just glided around the floor so effortlessly.” She scores 27 for her first dance and 30 for the trio.

And with that the curtains fall. What begun as just another season of Dancing with the Stars has finished in the most surreal circumstances imaginable. Next year, fingers crossed it – and everything else – will be back to normal.