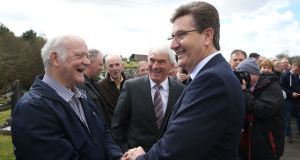 Singer Daniel O’Donnell is greeted by a mourner as he attends the funeral of funeral of country music star Big Tom. Photograph: Brian Lawless/PA Wire

It was like a funeral for a whole generation, not just one man. They came from every corner of Ireland to pay their last respects to Big Tom McBride, but they were also saying farewell to an era, now distant and increasingly forgotten.

Many had been in Glenamaddy the night the ballroom there finally closed, when there was “more crying than dancing”. Some had been among the thousands in Cricklewood, for the famous Galtymore’s last stand. But Big Tom had been a living presence on both those occasions. Now he too was gone.

So when his old backing band, The Mainliners, played Gentle Mother at the graveside, tears were guaranteed. The crowded cemetery sang along, shyly at first: so shyly that they were barely competing with the sniffles.

Then, as if gathering strength from the memories of the many times they had provided accompaniment to the man himself, the backing chorus grew more confident, and rousing.

It was a sad occasion, but it was also in parts a happy one. As often happens at Irish funerals, it felt a bit like a wedding too. This was especially true when, after Gentle Mother seemed to have brought proceedings to a natural conclusion, the band instead launched into a mini-set of their greatest hits, still graveside, with a who’s who of Irish country music stars joining in on guest vocals.

The change of mood was not inapt. Mourners had heard earlier how bereft Big Tom had been when, after 52 years of marriage, his wife Rose (“the boss”) died last January. Now, as a banner on the grave said, they had been reunited. As they had done so many times in dance-halls, therefore, the crowd clapped along to the upbeat numbers. A few couples even danced on the footpaths nearby.

Most people could not see the performers at the centre of the huddle, but the voices were unmistakable and could usually be identified with one name. First there was “Daniel” (O’Donnell), then “Philomena” (Begley, “queen of country” to Big Tom’s king), then “Margo”.

When reporters visible struggled to recognise a voice, help was instantly volunteered: “That’s Brian Coll” or “Declan Nerney”, we were told by the experts.

On a more typical April day, this concert might have been a lot shorter. But like the whole funeral, the music recital took place in glorious sunshine, which was doubly fortunate since the size of the attendance had far exceeded the capacity of small St Patrick’s Church.

In the packed carpark of Oram Sarsfields GAA club, there were registrations from Cork, and Donegal, and Mayo. Yellow northern number-plates abounded too, the border being a mere three miles away. Showband music was one of the few things that crossed traditional boundaries in this area, as did Big Tom – son of a Presbyterian father and Catholic mother – himself.

Later arrivals for the funeral had to take what was left of the parking spots on the narrow approaches. “Keep her tight to the left,” The Irish Times was advised while being directed onto a small patch of banked-up earth by the side of the road; “We’ll get two in there.”

Most people attended the service from outside: standing or, as the ceremony progressed, sitting on walls and grave-kerbs and listening to it on loudspeakers.

Among the countless little hills of Monaghan, there were two in the churchyard alone. The church stood on one, with a slope falling towards a little valley and then rising again to the far side of the cemetery, where the silence of those nearest the funeral Mass dissolved into a constant buzz of conversation from the more distant mourners.

The village had not quite ground to a halt for the day: twice during the service, a tractor rattled by somewhere. But Big Tom would have understood that. Tractors, especially old ones, were among his many hobbies, and his favoured form of transport was a quad known locally for its decibel levels.

“You would often see him driving around on [it],” recalled the chief celebrant, Fr Leo Creelman. “You’d hear him too. That noisy exhaust never seemed to get fixed.”

As described by Fr Creelman, Tom McBride was a man of multiple talents. His music aside, he loved land and farming. He captained Oram Sarsfields to a junior double in 1963, but also played golf to a high standard, with a handicap of nine.

He owned the first speed boat on Castleblayney’s Lough Muckno, and water-skied when he wasn’t falling off. By complete contrast, one of the things he loved to do at home was “incubate chick eggs in the good front room of the house, something that drove Rose mad”.

Noting his irreverent sense of humour, Fr Creelman recalled an occasion when Rose bought a special outfit for a wedding and modelled it at home. Her husband surveyed the ensemble, topped as it was by a fancy feathered hat and commented: “It’s a terror the things you see when you haven’t got your gun.” That earned laughter and a round of applause from church and churchyard.

There was at least one feathered hat among the standing mourners too. It was part of an immaculately formal, all-black ensemble worn by Julie Healy, who had travelled from Galway bearing a placard with a farewell tribute from fans on the Four Roads of Glenamaddy.

Her full-length velveteen coat must have been warm in the sunshine, but as she explained: “I think it’s important to dress well for funerals”. Julie was a strong candidate for the title of Big Tom’s biggest fan, but had plenty of competition, including Noleen Moen, from nearby Clontibret, who clutched a framed picture of herself with the singer and said she had “a hundred more” at home.

Mourners also included aides de camp of both the President (who had himself visited the McBride family home on Thursday) and Taoiseach, along with local TD and Minister for Business Heather Humphreys. Father Brian D’Arcy was among the priests concelebrating Mass.

The graveside oration was given by local man Jim O’Neill whose poetic farewell began with the line: “The drums are silent”. This was a reference to music, of course, but there is also a “drum” in the name Oram, which if not silent, is permanently muffled. In most local names here, the “drum” (meaning “ridge”, or drumlin) comes first. In Oram, (from Eoghram, the “ridge of Yew trees”, it lost its consonant.

Sure enough, there were a few Yew trees lining the cemetery, although they were outnumbered by the yellow whin bushes on an adjoining hill, a plant much more common in these parts. Now and forever, this had become Big Tom Country. And at the end of a moving tribute, O’Neill thanked the departed “Tomás Mór MacGiolla Bhríde” for making local people so proud of it.

Jodi Picoult: ‘Abortion will become a privilege, not a right’
9

A lock of hair
Real news has value SUBSCRIBE