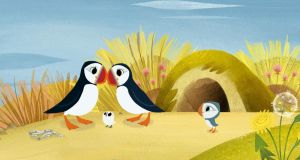 You can start out with the best intentions in the world, but let’s face it: at some point you’re going to plop the kids in front of the TV, particularly during the coronavirus outbreak. There’s no shame in it, but beware. A child’s natural impulse is to gravitate towards the loudest, most irritating pile of steaming cack they can find. This is how we find ourselves suffering through another monumentally grating episode of Paw Patrol, or the faux-educational drivel of Blaze and the Monster Machines. It doesn’t have to be this way. There is hope. Here’s some children’s TV you might actually enjoy. Every show on the list is either currently on TV or available on streaming platforms, so rejoice! Your days of terrible daytime TV are behind you.

RTÉJr
Narrated with gentle humour by Chris O’Dowd, Puffin Rock is a beautifully animated Irish cartoon set on a small Atlantic coast island. Following the adventures of Oona, a young puffin, and her baby brother Baba, it has a strong natural history focus, but the educational elements never get in the way of a good story, or a good joke. In one episode, for example, Oona and Baba search for the elusive great white egret.

When they eventually find it, standing majestically at the water’s edge, almost glowing in the moonlight, it is a moment of serene beauty. The illusion is quickly broken by the egret’s ungodly squawk, to which O’Dowd quietly says, “Wow. What a …unique call.” The little birds can only see the beauty in it, though, perfectly encapsulating what makes this show so special.

Now on its third season, this Bafta-winning pre-school cartoon is just a joy to watch. There is not a molecule of cynicism throughout the entire show. With a bright, vibrant and minimalist animation style, it follows a group of preschool animals called the Squirrel Club who go on adventures with their sort-of Cub Scout leader, Duggee. There’s a big emphasis on kids being active, with every fast-paced episode ending with the squirrels earning a badge for learning a new skill, or taking part in one activity or another. Apart from a general aesthetic appreciation, there is plenty to enjoy here, particularly in the cast of minor characters. From the group of 50’s-style greaser mice to the amazingly dramatic John Crab and his silent partner Nigel, they are filled with jokes for the sole benefit of parents.

Kids ask a lot of questions. Some are easy to answer, like “Can I have another Frube?” Others are profoundly difficult. Every episode of Ask the StoryBots begins with a child asking a question. They are wide-ranging and curious: Why do people look different? What happens when you flush the toilet? What is electricity? Over the course of each episode the StoryBots (funny little creatures who live in our computers) take a deep-dive into each topic to answer the questions with clarity and humour. With a mix of animation and live-action, as well as a host of celebrity guests including Edward Norton, Snoop Dog and Christina Applegate, this is one of the few shows where parents might actually learn something, too. So the next time your kid asks you a question like “why is the sky blue?” you can answer confidently, “I have absolutely no idea. Let’s turn on the TV and find out!”

You could argue Horrible Histories isn’t a kid’s show at all; it’s just too good to be. It is a rare example of what can happen when an obscenely talented group of writers and actors choose to work in children’s television. Kids will love the slapstick and more gruesome aspects of the skits, while parents will just marvel at the quality of the jokes on display. Spanning the entire history of human existence, from the Stone Age to the 1960’s, the sketches are often pitch-perfect send-ups of modern TV shows like Come Dine with Me and Wife Swap. The highlight of each episode, however, are the musical numbers. If you’re still unconvinced just look up “Born 2 Rule”, a boyband-style music video by the four King Georges. It is in every way perfect, plus you’ll never mix up your Georges again (remember: the sad one, the bad one, the mad one, and the fat one). Easily the best British sketch show since the Fast Show.

At first glance Bing looks like no great shakes. On closer inspection, however, it reveals itself to be something quite unique. Bing is a young, sensitive rabbit who lives with his carer/parent type thing Flop (voiced somewhat inexplicably by Mark Rylance).

It is a cartoon which mesmerises kids with its playful depictions of everyday life, but it is also a remarkably thoughtful guide to gentle parenting. Each short episode explores the “mishaps, mess, energy and wonder of being a relatively new human being”. Bing plays, gets scared, throws tantrums, cries, laughs, and every step of the way Flop is there to gently guide him. If this wasn’t animated it could pass for a documentary, so realistic are the situations and reactions.

You have probably already made up your mind about Spongebob Squarepants. Perhaps you accidentally stumbled across it, and discovered the loudest, most aggravating cartoon on TV; one that will most likely rot your child’s brain by virtue of simply existing. A perennial favourite with stoned college kids, this is more than just the cacophony of manic screaming it initially appears to be. Beneath the Day-Glo, sugar-rush exterior is a surprisingly sweet core.

The story of a sea sponge who lives in a pineapple at the bottom of the sea, it is a surreal, absurd, utterly original visual trip. Plus it can deftly and stealthily deliver some unexpected lessons. With unbridled optimism, loyalty to his friends, and general positive approach to life, we could all do with being a little bit more like SpongeBob.

Did you know the seahorse is the only animal where the male gives birth? Or that we have only explored about 5 per cent of the world’s oceans? Or that an octopus has three hearts? These are the kind of facts you need in your life. Animated by Dublin-based Brown Bag Studios, Octonauts is a treasure trove of nautical knowledge.

Every episode Captain Barnacles and his crew visit a new part of the ocean, discover strange but real creatures and learn about their behaviours and environments. Made with the help of the marine biologists who worked on Finding Nemo, it’s all factually correct so you can rest easy knowing your child is fully aware how fast a black marlin can swim (a ludicrous 104km/h).

It is not even controversial at this stage to say Adventure Time is one of the greatest cartoons ever created. Winner of eight Primetime Emmy Awards, it is a fantasy adventure set in the bright, colourful and post-apocalyptic world of Ooo. Finn the Human and Jake the Dog are best friends and spend their time going on epic quests, fighting demons, monsters and evil wizards, and just hanging out. It is a show of unbridled imagination. Everything is realised beautifully, from the voice-acting and script to the animation and lore. Despite having genuine “anything goes” feel, there is an internal logic and cohesion that holds the whole thing together.

The real magic, though, is in the characters. With names like Princess Bubblegum, Marceline the Vampire Queen, and the Ice King, you would expect them to be one-note jobbies, but they all reveal unexpected hidden depths. The Ice King for example, though hilarious, is clearly insane. When his tragic backstory is finally revealed you will be moved to tears.

This is one we guarantee you’ll enjoy more than your kids. When 12-year-old twins Dipper and Mabel spend the summer with their great-uncle Stan (or “Grunkie Stan”) in the small Oregon town of Gravity Falls, they discover a place filled with mystery and the supernatural. With a touch of the X-Files and Twin Peaks, not to mention a dash of The Simpsons, it has Pixar-levels of cross-generational appeal.

The humour can be dark at times, and each episode is filled with in-jokes and references kids won’t get, but this being a Disney show at heart, it is also about the importance of family and the pains of growing up. In 2016 Gravity Falls ended after just two seasons (both of which sit at 100 per cent on Rotten Tomatoes), but its cultural legacy lives on, influencing everything from Rick and Morty to Stranger Things.