How coronavirus turned Big Brother into a house of horrors 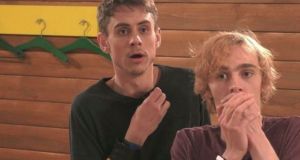 Contestants on the German version of Big Brother will find out what the rest of us all know on Tuesday evening. Photograph: www.sat1.de

Forget your Zoflora-scented flat or the freshly bleached kitchen table that is now your office, or even the sealed-off hospital rooms accessible only by medical professionals in hazmat suits: the two safest places in the world to hide from the coronavirus are officially the German and Canadian Big Brother houses.

The German version of the show started on February 6th, and the contestants currently have no idea that the rest of the world is living through a pandemic because, as per the rules of the show, they are not allowed any contact with the outside world. When they went into the house, no cases of coronavirus had been confirmed outside China. And, incredibly, even though new people are entering the show all the time, they are not allowed to tell the current housemates anything.

What a secret to keep! Imagine: the contestants are trying to talk them into revealing the latest football score or find out who the viewer’s favourite housemates are, and, inside, these poor reality stars-to-be are probably screaming that people are dying, and won’t they please, please wash their hands more often?

The housemates will find out about the coronavirus at 7pm tonight in a special episode, where they can ask Big Brother questions such as “Are my parents OK?” and get video messages from their family. It is due to be broadcast live because, well, why would you waste the TV gold that is contestants’ hysterical tears?

The Canadian Big Brother started on March 6th – so before mass gatherings were banned in the country – and the confused housemates can’t work out why they cannot hear the audience booing them during evictions. “Maybe the house is … suddenly soundproof?” offered one contestant in a clip that has gone viral on Twitter. Which sounds stupid, until you realise that randomly guessing: “Uh, maybe a global pandemic broke out and it’s unsafe to gather in crowds,” would be even weirder. It is understood they have finally been told since the clip was released.

Big Brother Brazil’s cast are also completely unaware of coronavirus – since they entered the house on January 21st, producers have refused to update them on the outside world.

It is not like the show hasn’t been preparing for this moment. In 2013, the UK Big Brother house had a fake “viral outbreak”, in which housemates had to decide which of them got the only six gas masks or go into quarantine. The task was inspired by Charlie Brooker’s 2008 horror series Dead Set, in which Big Brother’s production staff and contestants are trapped inside the house during a zombie apocalypse. Spoiler alert: it does not end well for Davina McCall.

Clearly, it is an ethical and moral nightmare withholding information from reality show participants. On the one hand, the ignorant bliss sounds incredible. Imagine waking up every day having slept, worry-free, through the night, and then having to constantly remind yourself the reason you have to take in every breath with a gasp is merely the tight pain of anxiety in your chest, not a superbug that has killed thousands of people. Unlike the rest of the population, you don’t have to live with the dual fears of running out of loo roll or accidentally infecting the people you love the most leading to their deaths. Lovely.

But then again: if UK Big Brother is anything to go by, the house will be a hotbed of unsanitary practices; career-ruining Jacuzzi sex, fumbles under the covers lit up by night vision cameras, and long snogs in the loo because that is the only place without cameras. Yes, it is clean now, but once the house is infected – remember those new contestants sworn to secrecy? – it’ll kick off quicker than a row over the washing up.

And by not telling them, isn’t it just saying that their safety is less of a priority than ratings? It’s not like the latest series of Love Island, where contestants were not told about former host Caroline Flack’s death until after they left the villa, which made for strangely disquieting viewing.

There is a fourth Big Brother house – who knew the show was still so popular? – where the cast had no idea about the coronavirus pandemic until yesterday, when producers on Big Brother Australia made the decision to tell the housemates about the “situation”. Personally, if a killer virus was sweeping the world, I would probably want to leave and speak to my family, just in case the worst happened, instead of riding it out on live TV, eyes firmly fixed on the cash prize and Instagram followers. That’s just me, though. I’m weird like that.

But nobody has so far walked out of the Australian Big Brother house. Is it worth ignoring the fact that your family are at risk from a global pandemic just to have access to a house full of toilet roll and pasta? Hard to say at this time – ask us again in three weeks’ time. – Guardian