Disney+: Where do you get it, how much does it cost, and what’s on it? 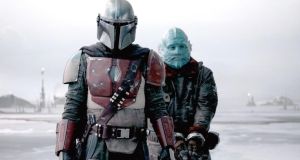 Disney+ is about to land on our TV screens, and you might be wondering if it’s worth signing up to the Mouse House to gain access to its vast archive of movies and animations.

HOW DO I GET DISNEY+?

Once you’ve subscribed, you’ll be able to stream Disney+ on all major mobile phones and connected TV devices. That includes game consoles, streaming media players and smart TVs. You can watch on up to four devices at a time, make multiple downloads, and get personalised recommendations. You can also set up to seven different profiles, and set Kids Profiles to keep your younger ones safe from all those High School Musical hormones.

Disney has also announced a deal that will make Disney+ available for purchase on Sky Q in the UK and Ireland. Under the deal, you’ll be able to access Disney+ through your Now TV stick in the coming months.

WHAT'S GOING TO BE ON DISNEY+?

Let’s cut to the chase. If your kids are into Star Wars, then just drop everything and sign up right away, as they’ll be making a beeline for the much-anticipated new Star Wars series The Mandalorian ...

It’s a big selling-point for Disney+ – unlimited access to the entire Star Wars universe. As well as all the movies in the saga, you’ll also be able to watch the entire collection of Star Wars: The Clone Wars along with The New Yoda Chronicles, Star Wars Rebels and the ultimate big-brand hook-up, Lego Star Wars.

And you can look forward to the new Obi-Wan Kenobi series starring Ewan MacGregor – working title Pilgrim – which is currently in production but has been bedevilled with script issues.

If you decide to shell out €69.99 for the year, you will get access to over 500 movies – including the big blockbusters from the Marvel Cinematic Universe and beloved Pixar classics – more than 350 TV series and 26 Disney+ originals. You’ll have peace of mind knowing that the kids can’t possibly get bored during lockdown. Not with 600 episodes of The Simpsons to get through. If you don’t have children, you may not see much reason to subscribe to Disney+, but if you’re a big kid at heart, you might just find this the perfect place to relive your youth.

Some series deemed too mature for Disney’s target audience, including High Fidelity starring Zoe Kravitz, have been moved to Disney-owned Hulu. So if it’s more adult fare you’re after, you may prefer to hold on to your Netflix, Now TV or Amazon Prime subscription.

Here are some of the original series that will be available on launch date.

The Mandalorian
Set in the time between the fall of the Empire and the rise of the First Order, the series features the meme of 2019, Baby Yoda, who is not actually Yoda, but another member of the Jedi master’s species, and is, despite his cutesy-cutesy look, 50 years old. The titular Mandalorian is a lone gunman and bounty hunter at the outer reaches of the galaxy. The series is directed by Jon Favreau, and what sets it apart from other Star Wars spin-off series is that this is live action and not CGI. Hopefully, it will also set itself apart from other Star Wars fare by having a coherent plot.

Encore!
Another series revolving around high school musicals, except this one is not a mockumentary, but a docuseries presented by Kristen Bell and Will Gluck, in which a troupe of grown-ups go back to school to recreate the musical they starred in while still callow youths. Each week the cast of a different high school musical is reunited, and must do an encore performance on their old school’s stage. Will they still be able to hit those high notes and pull off that double backflip? Watch as the past pupils of Santana High School in California reunite for a repeat performance of Annie, the graduates of Saginaw High School in Texas revisit Beauty and the Beast, and the long-past pupils of Hackensack High School in New Jersey don the leather gear again for another go at Grease. Again, this one lost me at “high”.

The World According to Jeff Goldblum
Disney+ will feature a raft of National Geographic content – so kids can take a break from what’s happening on Tatooine and learn more about their own planet. So why is actor Jeff Goldblum hosting a series for the channel? Is he a secret scientist? “I know nothing – that’s the premise,” says Goldblum in the trailer. Armed with a childlike curiosity and an irrepressible joie de vivre, Goldblum delves deep into some of the things that fascinate him, including sneakers, ice-cream, tattoos and jewellery.

Be warned: this show may contain Jeff Goldblum, but it won’t contain him – he’s likely to break into song, or dance, or mad musings at any moment, and he’ll definitely go off-script and on tangents. I’ll go along with the Goldblum on this trip – should be a blast.

Diary of a Future President

You know when you start a diary, but you already know how it’s going to end? Tess Romero stars as Elena, a go-getting 12-year-old Cuban-American who just knows for certain that she is destined to become president of the United States of America. But in the meantime, she has to navigate the complexities of life as a precocious preteen, and negotiate her relationship with her lawyer mom, Gabi, and her older brother, Bobby. Throughout the show, we are treated to flashforwards of a grown-up Eleni as she conducts her campaign for the White House. Life is all politics, really, isn’t it?

Marvel Hero Project
They may not have the superpowers of Thor, Iron Man or The Hulk, but the children featured in this documentary series have even more potent powers of caring, kindness and selflessness. Among them are “Sensational Jordan”, born with a limb difference, who designed her own prosthetic arm that shoots glitter (naturally), and founded Born Just Right, an organisation that supports children with disabilities and promotes inclusivity.

Also featured is “Incredible Elijah”, who began campaigning for greater awareness of child abuse after learning his friend had suffered abuse at the hands of her parents, and “Unstoppable Adonis”, who lost his sight aged five due to congenital glaucoma, and campaigned for greater accessibility for visually impaired people. For each episode, Marvel has created a special edition comic with these extraordinary kids as the central heroes. You can read them here.

There are many mysteries to life, and who better to unravel them than the handmade “spork” from Toy Story 4? In this series of animated shorts, Forky asks such burning questions as “what is money?”, “what is time?” (see question 1) and “what is love?” (see also question 1). Luckily, Forky has some expert help to answer his questions – his companions from Toy Story, including Hamm, Rex, Trixie and Mr Pricklepants.

When a writer can’t write, another art form satisfies the creative itch
9

The beginning of a beautiful friendship, that stretched from Trumbo to Casablanca
Real news has value SUBSCRIBE