Anyone got a number for the Simon Cowell of composting? 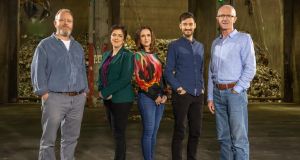 Climate change poses a clear and present threat to human civilisation, our pampered western lifestyles and every Irish person’s inviolable right to spend 30 minutes in the shower scrubbing away a hangover.

But as television it can make for rather didactic viewing. Composting and quinoa good, driving to the shops in your diesel SUV and generally enjoying yourself bad – and so forth.

RTÉ’s solution is to approach the subject from several directions at once as part of its Science Week schedule. The Roland Emmerich, mega-destruction stuff we learned about in Monday’s Will Ireland Survive 2050? (condensed version: if you live near the coast and plan on being around in 2050 best invest in some scuba gear).

But now comes the cuddly counterpoint, with the first of three episodes of What Planet Are You On?, to be broadcast across consecutive nights.

There’s been lots of chatter lately about the relative merits of RTÉ’s programming output, prompted by news of a gaping void in its finances. Yet if there’s one thing at which Irish broadcasters excel, it is parachuting regular householders into mildly discombobulating circumstances and letting the drama unfold.

As Scandinavia is to moody thrillers and the UK to Broadchurch rip-offs, so we are to family-in-a-pickle reality telly. Nothing – not even an imminent collapse into Mad Max-style dystopia – can take that away from us.

With Maia Dunphy presenting, What Planet Are You On? is thus as sturdy as a well-packed recycling bin and as reliable as a commuter-hour bus service in a European country other than Ireland.

And with a familiar format too, as three families, from Dublin, Galway and Mullingar (which is in COUNTY WESTMEATH, as Dunphy insists on reminding us), vie to be more sustainable.

They aren’t simply in it for the good of the planet. There’s a €2,000 cheque in the offing if they can bring their recycling up to scratch and reduce their water and car usage to levels that don’t pose an imminent risk to the species.

Kicking us off are the Cullens from Finglas, whose headline quirk is their insistence on using bottled water. As filming got under way, the Cullens’ aversion to taps might have come off as mildly paranoid (they have issues with all the fluoride). In this era of never-ending boil-notices, though, who can blame them?

The wacky quotient is meanwhile ticked off by the McKevitts in Mullingar. Jason, the dad, is a recycling agnostic. His preferred method of waste disposal is to lump all the plastic into the fireplace and burn it to ashes, to the horror of the rest of the family, the dog in particular.

Disappointingly, from an entertainment if not an environmental perspective, that’s as outrageous as things get.

Final family the Gannons from Galway live in a one-off house and so drive everywhere. They are, however, otherwise conscientious about their carbon footprint. And unlike the McKevitts they don’t recreate the Wicker Man in their living room every evening. Part of you – the part thinking of switching to Netflix – wishes they did.

Where it falls down a bit is in the expert “judges”, a quartet of rather colourless academic types. If there’s a composting equivalent of Simon Cowell, What Planet Are You On? could really use them.

But it is nonetheless revealing and reasonably entertaining to watch three average households grapple with sustainability.

Moreover, with I’m A Celebrity returning at the weekend, we should probably enjoy the novelty of seeing normal people on the airwaves while we can. Before we know it, the schedule will be jammed with radioactive levels of whingeing Z-listers. And then melting icebergs and unhappy polar bears will be the least of our worries.