What’s the argument for public service broadcasting, and why isn’t it winning? 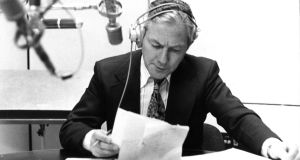 Too often, the attributes that made Gay Byrne great – relentless professionalism, personal empathy and a willingness to push boundaries – are lacking in the current day-to-day output. Photograph: Eddie Kelly

It was a week of looking back and looking forward for RTÉ. The death of its most famous broadcaster on Monday prompted a flood of reminiscences, retrospectives and eulogies, followed by the hurried late-night confirmation on Wednesday (after a report had appeared in The Irish Times) that cuts of 60 million euro and 200 jobs would be required over the next three years to keep the country’s public service broadcaster afloat.

It remains to be seen whether the proposed restructuring, redundancies, sell-offs and closures will prove sufficient to staunch RTÉ’s bleeding, but it seems unlikely.

The reasons for the crisis in Montrose are so well-established that they’re wearisome to recite again: the collapse of the traditional advertising-based business model which formed one leg of the broadcaster’s income; the studied indifference of successive Fine Gael-led governments to the obvious need for reform of the archaic TV licence system which was the other leg.

Some observers will add that RTÉ itself bears some of the blame for failing to move with sufficient speed to reform its operations and tailor its services to the needs of an audience which is giving up on traditional linear TV and radio at a faster pace than the broadcaster itself anticipated.

These are dauntingly complex global challenges, the solutions to which are far from clear

What seems to have been lost in all of this is much consideration of what exactly the purpose of public service content (as I suppose we must learn to call it) should be in the era of Facebook, YouTube and Netflix. So it’s worth noting another event that took place in Dublin this week, when parliamentary representatives from around the world heard testimony from experts in free speech, human rights, and media and technology law under the auspices of the International Grand Committee on Disinformation and “Fake News”.

Among the subjects covered were the ever-increasing use of new media technologies to spread lies and propaganda across international boundaries, and the ways in which the algorithms used by social media companies stoke extremism and drive political polarisation.

These are dauntingly complex global challenges, the solutions to which are far from clear. But it’s not too far-fetched, surely, to suggest that the principles of public service broadcasting, developed in the middle of the last century in the wake of the collapse of European liberal democracy in the 1930s, might still be relevant in the current moment. For example, a properly funded news and current affairs division with its independence and commitment to editorial objectivity guaranteed by statute is certainly worth valuing right now.

There are other considerations especially for a small country with an open economy, currently facing uncertainty over its future relationship with its nearest neighbour. Irish people pay hundreds of millions of euro in subscription fees to cable, satellite and online platforms located in the UK and US.

Hundreds of millions more are generated here in advertising revenue for offshore broadcasters and digital services, very little or none of which is reinvested in Irish productions or Irish content. Without a strong local public service operator, the chances of seeing drama, documentaries, music or comedy which reflect the lives, experiences and cultures of the people who live in this country will inevitably be drastically reduced, or even erased.

These are not new arguments, and it’s worth wondering why they seem to have failed to achieve greater political purchase at government level. One potential reason is the obvious gap between the high-minded aspirations attached to public service broadcasting in the abstract and the banal and often mediocre reality of RTÉ’s actual programming.

Too often, the attributes that made Gay Byrne great – relentless professionalism, personal empathy and a willingness to push boundaries – are lacking in the current day-to-day output. Indeed, it’s widely believed that Byrne himself in his later years thought his true heir was Tommy Tiernan rather than the crop of star presenters who currently appear on the annual highest-paid list.

Add RTÉ’s relentless use of its own programmes for cross-promotion and self-congratulation to the reasons why the public service argument has not so far succeeded. But those of us in other media should also look at whether we have done enough to explore that argument thoroughly and especially to pursue successive governments over their failure to take coherent action.

Because the worst culprits in this whole sorry affair are undoubtedly the current Government. While their predecessors dithered and procrastinated over replacing the licence fee for fear of a repeat of the Irish Water fiasco, the decision by current Minister for Communications Richard Bruton to defer the matter for five years is inexplicable, and represents the worst political intervention in Irish broadcasting since Ray Burke was minister 30 years ago.

If that decision leads to the effective end of public service broadcasting in Ireland – and it might – it will be a sorry legacy for Mr Bruton and his colleagues to own.