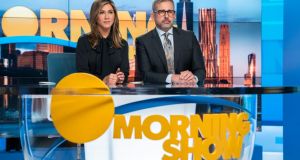 The Morning Show, the $150 million (€134 million) flagship series with which Apple is rolling out its new streaming TV service, isn’t terrible. This prestige-adjacent vehicle for Jennifer Aniston, Reese Witherspoon and Steve Carell is instead as smooth and blandly contoured as a box-fresh iPhone.

It is of such stonking okay-ishness you can feel it slipping from your memory while you are sitting in front of it. It is three stars out of five incarnate. A shrug of indifference catalysed as $15 million (€13 million) per episode high-end television. You can’t even hate watch.

The potential for a cut ’n thrust drama amid the backstabbing and killer smiles of American network TV is undeniable. And The Morning Show goes for it by putting #MeToo front and centre.

So far so ripped from the headlines. But then The Morning Show decides that, actually, it would rather be a rom-com for Pretty Little Liars fans. In parachutes Reese Witherspoon as a crazy-eyed hick reporter named Bradley Jackson (‘Bradley Jackson’ sounds like a brand of tractor or All American leisure-wear – is this on purpose?) .

She blunders into a career in New York thanks to the unlikely support of The Morning Show’s network boss. But is he championing Jackson – or merely attempting to outflank the problematic Levy (holding out in her contract negotiations)?

The smirking suit is played by Billy Crudup. He seems to have been told to pitch his character as low-key sleazy rather than rabidly Machiavellian – a weird choice in the context. Around and around we go from there. As poor Mitch protests his “victimisation” by #MeToo, Carrell radiates unnerving levels of charm (is he ever capable of being less than entirely likeable?).

Aniston’s Levy frets about being usurped by a younger rival. Witherspoon gives it the full early Julia Roberts. Rarely does the action slow down long enough to even approach coherence.

If indisputably pretty, it comes as no surprise to learn that The Morning Show was drastically revised following the disgracing of Harvey Weinstein in 2017. Or that the original show-runner departed 18 months ago owing to creative differences. This is a gorgeous hodgepodge: the clinical definition of “quite good” or a borderline fresh rating on Rotten Tomatoes. But for Apple will “quite good” cut it?

Unless you’ve been hiding under a iPhone 11 – yes, the massive new one with the wonky three-eyed camera – you’ll know gadget godzilla is getting into television in a serious way.

Exactly why it has chosen this moment – when the entire entertainment industry is doing likewise – is unclear. Under Steve Jobs, the company’s guiding mantra was “think different”. But with The Morning Show it is thinking in exactly the same terms as Netflix, Disney (soon to roll-out Disney +), Hulu, Amazon Prime and the arriving HBO Max.

That would have been dandy had it blown us away with its launch roster. There are just four shows – so each carries a great deal of weight. The best is also perhaps the slightest. Dickinson is essentially the life of death-obsessed poet Emily Dickinson re-told through the medium of Gossip Girl (Hailee Steinfeld is totes eye-rolling as the sombre, sloe-eyed sonnetist).

Also in the “just fine” column is For All Mankind, a would-be inspirational reappraisal of the space race from Battlestar Galactica’s Ronald D Moore that sheds light on the unheralded women who toiled at Nasa.

The two putative blockbusters are fantasy saga See and The Morning Show. The former is Game of Thrones meets Bird Box with sprinklings of Hawk the Slayer. You probably haven’t heard of Hawk the Slayer so let me explain that it was an early Eighties swords and sorcery movie dimly remembered for its terrible puppetry and cardboard dialogue.

See is just as dreadful, in its lavish way. The setting is a post-apocalyptic America, where a virus has rendered the entire population blind. Unable to survive without sight everybody starves to death and humanity ceases to extinct. The end.

Actually no – we’re just fine. Why wouldn’t we be, with Jason Momoa’s Baba Voss leading us? He can’t see. But doesn’t stop him wielding a scimitar in a manner that would have his Game of Thrones character Khal Drogo breaking out in goosebumps.

That’s the premise from Peaky Blinder’s Steven Knight and if you thought his flatcap ’n floozies odyssey was a triumph of style over brains wait until you clap eyes on See. It’s season eight of Game of Thrones minus the wit, sensitivity and narrative through line.

And then there is The Morning Show, the one on which everything truly hangs. The best to be said is that if it randomly popped upon Channel 4 on a Tuesday or briefly topped your Netflix queue you might stay with it. It’s breezy, the interior of Alex’s Central Park apartment is sumptuous, you won’t feel the time passing.

But it is in no way the equivalent of a flawlessly-designed iPhone or MacBook Air. In a small but perhaps significant way, Apple, with its entry into high-end TV, appears to have forgotten what made it so adored as a company in the first place.

Patrick Freyne: It is now late-period Dermot Bannon. He is on the verge of losing it
3

The Clean Body: A Modern History – Dirty secrets from the past
8