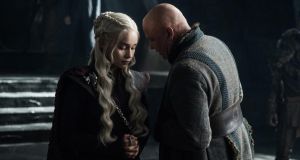 The Game of Thrones star Conleth Hill has denied being responsible for the show’s coffee-cup controversy.

Viewers poked fun at the fantasy epic when a rogue Starbucks cup was spotted on a table during an episode in the final season earlier this year.

Emilia Clarke, who played Daenerys Targaryen, told the American talkshow host Jimmy Fallon last month that the Irish actor, who portrayed the master of spies Lord Varys, admitted being responsible. But Hill told Channel 4 yesterday: “I would need to have had Mr Man arms to leave a coffee cup there. I took a bullet for Emilia Clarke, and she touted on me.” He told the broadcaster’s Sunday Brunch show: “You know, there’s no proof that I did it. So accuse away!” And the actor quipped: “I’m just not making any comments until I have a lawyer... It definitely wasn’t product placement!”

Clarke, who was seen as a culprit, told Fallon: “We had a party before the Emmys recently, and Conleth, who plays Varys, who’s sitting next to me in that scene, he pulls me aside and he’s, like, ‘Emilia, I have got to tell you something, love. The coffee cup was mine.’”

The hugely popular fantasy epic finished its eight-season run in May, but many fans were left disappointed, signing an online petition calling for a remake of the last episodes with “competent writers”. – PA

From Narnia to Harry Potter: The grown-up messages in children’s books
8