I’m a Celebrity 2019: Who are the Irish stars heading to the jungle? 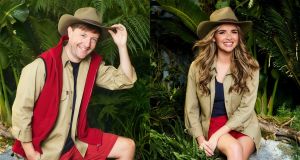 Two Irish stars, Nadine Coyle and Andrew Maxwell, are in the line-up for this year’s I’m a Celebrity... Get Me Out of Here. The former Girls Aloud singer and the stand-up comedian are joining Caitlyn Jenner, Ian Wright, Kate Garraway and Roman Kemp, among others, in the Australian jungle for the reality show, which begins on Virgin Media One and ITV on Sunday.

Coyle says she hopes the challenges of the series, which include having to live on food rations with very few luxuries and take part in Ant and Dec’s bushtucker trials, which often involve creepy-crawlies, will have a positive impact on her.

“I really hope that, by doing this, it pushes me so far out the comfort zone and that I learn to be comfortable, feel relaxed and do the things that I didn’t used to be afraid of,” she says.

I used to be brave. Now I have got so fearful even being in the car, flying or general things. I think it is since I became a parent that I am much more afraid

“I really want to try something completely new. I am scared of so many things. I used to be brave. In the past I’ve opened a restaurant, had a record label, had my daughter, and it was go, go, go with all of these. Now I have got so fearful even being in the car, flying or general things. I think it is since I became a parent that I am much more afraid.”

The reality of living in the jungle camp, Coyle says, will be a learning curve, as she has not done anything like it before. “I’ve never boiled water on a fire, chopped firewood, slept outside – I do hope I learn stuff about me and it’s the next phase.”

Coyle also says that being separated from her five-year-old daughter, Anaiya, is going to be one of the most difficult challenges of all. If she is not the first celebrity to be voted out by viewers, it will be the longest they have ever been apart. “I have been away for 10 days for work before but not longer. I am dreading being away from everybody and not being able to phone and say, ‘How are you doing? How is my daughter?’”

IAN WRIGHT
Age 56
Profession Former Arsenal and England striker turned sports pundit
Phobia “Some of those things – snakes, rats and creepy-crawlies – will make me squirm, but I will deal with them when I am in there”

CAITLYN JENNER
Age 70
Profession Retired Olympic gold medal-winning decathlete turned reality-TV star
Phobia “None but, like everyone, insects do gross me out”

MYLES STEPHENSON
Age 28
Profession Member of the boy band Rak-Su, who won The X Factor in 2017
Phobia “Bugs and spiders – I have to get my family members to get rid of them for me”

KATE GARRAWAY
Age 52
Profession Good Morning Britain presenter and radio host
Phobia “Spiders, heights, being in a box covered with snakes – I am terrified of absolutely everything” – PA