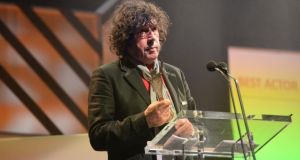 The categories of Best Ensemble and Best Movement Direction are being introduced for the next awards ceremony, which takes place in the National Concert Hall on Sunday, February 25th, 2018.

A third category is also being modified, with Best Sound Design changing to Best Soundscape, to recognise the wider variety of music and sound design elements that appear in modern Irish theatrical productions.

“The new categories available to us for The Irish Times Theatre Awards are very exciting developments for us to work with,” says Ella Daly, one of three judges for this year’s awards. “We have enjoyed the challenge of considering work with these new parameters. The introduction of Movement Direction has allowed us to consider and acknowledge for the first time the significant contribution of movement directors, stage directors and choreographers to the landscape of theatre.

“Over the last number of years the judges have lobbied for the introduction of an ensemble award and we are delighted to introduce it for 2017,” she added. “This award will recognise work where the cast have been integral in the development of the piece and/or where the world of the play is achieved through the dedication and rigour of an entire cast in creating a shared language or landscape for the audience.”

The judges will meet in December to make their final selections and shortlists for this year’s awards. The other two judges for this year’s competition are Catríona Crowe and Paula Shields.

The shortlists across 17 categories will be printed on January 13th in Ticket, in the Saturday edition of The Irish Times.

“The judges are once again equal parts energised and humbled by the quality and quantity of work produced by Irish theatre in 2017,” said Daly. “Over the last 12 months we have seen the sector across the entire island of Ireland, proving itself to be vibrant, thriving and ambitious. The year has been a year of lots of music, engaging festival programmes, interesting site specific choices, outstanding new work and distinguished revivals. As we came out of the year of 1916 commemoration and into a year of many changes to the theatre landscape, with new artistic directors in both the Abbey and the Gate, we see a sector invigorated by change and looking to the future.”

This year also saw TileStyle come on board as the new associate partner for The Irish Times Irish Theatre Awards. The deal means the company will sponsor the competition for at least three years. For the first time, the ceremony on February 25th will also be livestreamed by RTÉ on its culture website.

Tickets for The Irish Times Theatre Awards are now on sale through nch.ie