The Red Shoes: A freestyle approach to a dark and charming fairytale

In the Gate’s dark Christmas spectacle, a bold retelling tries on an old fairytale for size 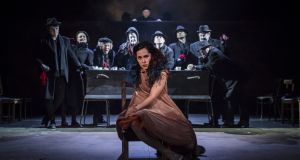 The Red Shoes entertains the fairytale and still dances away from it. Photograph: Ste Murray

In the Gate’s darkly spectacular Christmas show The Red Shoes, a boldly new production tries on an old fairytale for size.

Hans Christian Andersen’s fable was always a cautionary tale about the dazzling sin of decadence, allowing a spoiled orphan to revel in an enchanted pair of red shoes, before punishing her religiously for such immodesty. Those shoes won’t quite fit, recognises Nancy Harris’s much more forgiving and knowing new version. Although it treads a similar path lightly, here our orphan is a misunderstood free spirit, allowed to visit a range of fairytales and styles.

When her wild and distrusted mother dies, in a timeless pop-up book version of Ireland, Stephanie Dufresne’s mute Karen is taken in by ghastly Dublin relatives. Owen Roe’s huckster property developer is currently transforming the nearby forest into a casino; the wonderfully funny Marion O’Dwyer, as his hypocritical South Dublin doyenne wife, hopes to impress the Save the Orphans Foundation while murdering all available vowel sounds; and Robbie O’Connor, as their goth-punk son Clive, prowls the land with an axe.

But housekeeper Mags (Rosaleen Linehan) and David Pearse’s impish shoemaker Sylvester (“A wizard where feet are concerned”) share the role of fairy godmother, introducing Karen to a pair of glittering ruby-red pumps that Dorothy might have killed for yet again. In those shoes, Dufresne is transformed – she even regains her speech at their first mention. When she dances in them, it brings a ribbon of colour into the gold and black den of Monica Frawley’s gothic design, sending mischievous ripples of motion through the entire charming ensemble under Liz Roche’s time-bending choreography.

Like Karen, director Selina Cartmell’s production takes a while to hit its stride, building up through Pearse’s arch verses, modern quips, a succession of striking stage pictures and keen visual jokes, then Marc Teitler’s rattling and shimmering music and even songs, all of which seem to gather rather than blend. Similarly, it’s hard to work out why Mags requires so much attention, including a song about her invisibility presented as a showstopper, other than that she is played by Linehan, who must not be squandered.

Yet the show is most elegantly itself when Dufresne, an exquisite dancer, is allowed to take flight, through a disorienting ball where she meets some guy called Prince (“My parents loved Purple Rain,” says an enjoyable Paul Mescal) and later, in the show’s most uncanny realisation of twisted beauty, and Cartmell’s signature, when she dances through the twirling snow, en pointe, as though without feet. (“That’s a bit dark,” deadpans Roe, accurately.)

Harris, no scold, is unwilling to punish her character just for wanting, though, and it makes for a curious, corrected spectacle. The Red Shoes entertains the fairytale and still dances away from it.

John Hume: The US connection and the making of a documentary
7

Galway International Arts Festival: Like a phoenix from the flames
10