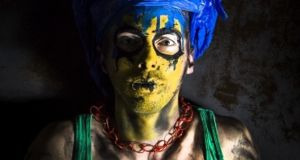 If humanity – boldly represented here by the US – had to start all over again, under both the fall out and black out of a nuclear holocaust, what stories would people tell each other?

Forced to rely on memories made pudgy by electronic devices, it seems plausible they might spend less time dredging up Beowulf, the Iliad or Hamlet, than repeating the plot, dialogue and sight gags of classic Simpsons episodes.

In the wacky seriousness of Anne Washburn’s 2012 play, the “Cape Feare” episode of The Simpsons – with all its smash-cutting references – becomes a cultural artefact worthy of Talmudic scrutiny, and also a story that might evolve (or mutate) to bear the weight of a new reality.

Initially reconstructed by a band of wary survivors around the campfire, as we learn glancing details of the recent apocalypse, the tale grows in the telling over successive decades. In the play’s Irish premiere for the Rough Magic Seeds mentorship programme, that ambitious scope also makes it a vehicle for the imagination of its design team.

As the story evolves, pieced together by an assured ensemble over close to three hours, so does the look of the show. Beginning with a chaos of chairs under the flame flickers of Dara Hoban’s lights, Molly O’Cathain’s set shifts to the cluttered expanse of a ramshackle theatre, where this company of players rehearse an bastardised version a few years later (more Good Quarto Simpsons than First Folio) competing against rival troupes using splintered ads and pop-music mashups.

Washburn’s arch projection of this lawless, contaminated society makes memory a valuable commodity (people sell pristinely remembered quotes like intellectual property), while troupes divide on whether to peddle escapist entertainment or something freighted with meaning. (The future, with wry nods to theatre and entertainment history, looks similar to the past.)

Director Ronan Phelan’s attentive and engaging production walks a similar line, full of good gags, practiced physical routines and darker resonances, even as it becomes stretched by the demands of significant transformations over two intervals. For the third act, set several decades later, the production conceives of its retelling as a kind of Broadway Musical Morality play. The original details warp into a stark revenge plot between good and evil, sung through Sineád Diskin’s persuasively slick original live score. O’Cathain’s design gets honed into stripped totems, in the stark black and yellow of nuclear warning. It all looks like a pop-cultural religious ritual as conceived by Julie Taymor.

That sophistication is hard to reconcile with the implied disintegration of the world, though, as irreversible as one sympathetic character’s failing memory. The driest interpretation is that civilisation may have recovered through its sheer belief in re-establishing commercial product, or else a Seeds showcase is reluctant to appear primitive. Either way, though, there are enough bright ideas and creative talent in Mr Burns to keep the lights flaring.

Donald Clarke: Stop me if you think you’ve heard this one before
10

The appeal of Phil Collins? It's his friendly, happy face
Real news has value SUBSCRIBE