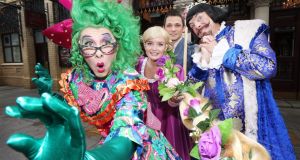 I’m Too Fat for This Show

It might not strike you as seasonal programming, but actor Kate Huffman’s solo show has its own wry sense of timing. Dealing with a serious and in some cases life-threatening subject at a time celebrated for indulgence, I’m Too Fat for This Show makes a comedy about her real eating disorder, spurred on by an obsessive-compulsive disorder. Performed earlier on the Hollywood Fringe Festival, in a town that can more than relate, Huffman’s performance has her playing just shy of 20 characters (she’s a graduate of the improv group Upright Citizens Brigade) while using multi-media effects to portray her strict set of self-imposed rules and rituals. Having scooped up awards in LA, the show is, unsurprisingly, not an instruction manual in body dysmorphia, but an opportunity for people to address obsessions, neuroses and negativity and hopefully defuse them.

You could argue that Dead Cat Bounce, Ireland’s greatest ever comedy hard rock group, are back by popular demand. But, really, who would have thought to demand it? Three years ago, the four lads quit the comedy music business forever, and held their last ever glorious, emotional performances for the tear-streaked appreciation of their followers. Now, much like Blur or LCD Soundsystem, they have returned, like a phoenix from the flames of canny marketing, to bid adieu, again, with this, their second-ever last-ever show. They do hate long goodbyes. Initially, Dead Cat Bounce’s two gigs sold out almost immediately; now that run has been extended to five gigs that are not sold out. This presents us with something to relish: a various-times-in-a-lifetime opportunity to relive their rather sublime material, from the accelerating misadventure of Switzerland to their Sondheim-baiting Famine! The Musical. Let’s go.

At any other point in the year, a radical reinterpretation of a classic text with a liberal amount of audience participation would be enough to strike terror in the hearts of theatre goers. At Christmas, though, we call this pantomime. For many kids, this is an introduction to live performance, and there will always be relatively new arrivals to the world who don’t know how things pan out in Sleeping Beauty. There are many more of us who never suspected – before the Tivoli told us otherwise – that it required help from somebody called Sammy Sausages. That may be a rare addition in panto, a form so lacquered in ritual and annually reissued gags, that its only rival for unaltered spectacle may be the Latin mass – similarly fond of men in frocks. This year’s national panto index does include another less frequently visited figure in the Gaiety’s Rapunzel, directed by Gaiety Panto alum Daryn Crosbie. And though it reverently includes seasoned panto dame Joe Conlan and fresh-faced Ciara Lyons in the title role, that at least is a sign of a pantomime letting its hair down.