Ireland dates among shows cancelled due to ‘unforseen family circumstances’ 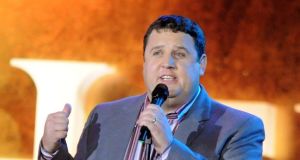 Peter Kay’s first live stand-up tour in eight years has been cancelled due to “unforeseen family circumstances”, the comedian has said.

The hotly anticipated Ireland and UK tour was due to begin in Birmingham in April, with dates through to 2019.

In a statement on Wednesday, Kay said: “Due to unforeseen family circumstances, I deeply regret that I am having to cancel all of my upcoming work projects. This unfortunately includes my upcoming stand-up tour, Dance For Life shows and any outstanding live work commitments.

“My sincerest apologies. This decision has not been taken lightly and I’m sure you’ll understand my family must always come first.

“I’ve always endeavoured to protect my family’s privacy from the media. I hope that the media and the public will continue to respect our privacy at this time.

The statement said ticketholders for both the live arena tour and Dance For Life shows will be refunded from their original point of purchase.

Shortly after tickets for the initial 26 gigs went on sale in November, he tripled the line-up of events to more than 80, including a total of 16 shows in his home town of Manchester.

Announcing his return to the stage, he said: “I really miss it. I know how lucky I am to be making television series and have really loved these past few years working on Car Share, but I miss doing stand-up.

“As terrifying as it is, when it works there’s nothing more fun and exciting. Plus, a lot has happened in the last eight years, with Trump, Twitter and my Nan getting her front bush trimmed at the age of 96.

Over the last years, Kay has delighted fans with his hit Bafta-winning TV series, Car Share.

After writing and starring in two series, he announced earlier this year that he would not be creating a third. But he later consoled dismayed fans by promising two further episodes, including an official finale.

Announcing the news during the 2017 BBC One Children In Need appeal show, he also pledged his support to the charity by auctioning tickets to a one-off intimate gig in Blackpool next summer. –PA

Ten philosophers to help us through the coronavirus crisis
7