Beauty and the Beast in Belfast: Bloodless, bland and banal 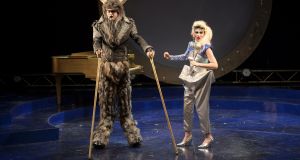 It is a daunting task, particularly in the case of theatre for young audiences, to take a cherished classic such Beauty and the Beast and give it a new modern-day treatment without losing its magic. Derek O’Connor and Trevor J Colgan have bravely shouldered the challenge of moving away from the Disney model and, in collaboration with composer Katie Richardson, have come up with a 1980s rock opera alternative. But not even Paul Boyd’s effervescent direction can lift a show that is devoid of that vital basic ingredient: there is no magic.

The Beast (Ross Hoey) is a masked, lupine recluse with a big voice and a strange way of walking. Grotesque and tortured, he has become merely a money-making machine for his scheming manager Shazza (Orla Gormley) and it takes the intervention of sweet, motherless Bella (Charlotte McCurry) and her amiable Jack-of-all trades father Theo (Mark Dugdale) to unlock his songwriting block and reclaim his true identity. Mystifyingly, the central component of Ciaran Bagnall’s neon blue circular set is a grand piano, which remains unplayed throughout. A pair of stage hands toils wearily with a weighty revolving stage as the limp script unfolds, punctuated by a series of cheesy songs about life, love, loss … and pizzas.

Far from drawing young imaginations into a brave new world of wonder, the whole thing feels flat and cannot be rescued by cranking up the volume on McCurry’s clear vocals or puffing dry ice over Gormley’s snarling efforts as the baddie of the piece.

Why Didn’t You Just Do What You Were Told?: A superb collection
4