They Called Her Vivaldi review: A rich and charming symphony 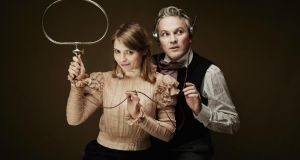 Welcome to the town of Triste, a happier place than it sounds. The streets are full of water, being an Italian canal city, where businesses stay afloat through charmingly old-fashioned means, much like the glowing candy-cane gondola moorings of Zia Bergin-Holly’s fetching set.

Here you find a lively haberdashery, run by a comically creaking old father, whose reliance on the bucket trade has all but bottomed out, while his eccentric daughter turns her private misfortune into a lucrative side project. “They called her Vivaldi,” says Louis Lovett, playing both the spry narrator and a giddily entertaining gallery of characters at the Peacock Theatre, in Dublin.

Genevieve Hulme-Beaman emerges beneath an elaborate helmet contraption, erupting with aerials, which protects her from the noise of the world (“Cacophonong”, they call her condition, with lyrical delight in language and word play). But that device also lets her tune into each individual’s personal song, which she composes like a musical portrait artist. And that business is booming. So what happens one day when her helmet is stolen? And what will she discover in her mission to get it back?

Like the title character, Theatre Lovett knows the score. To watch this delightfully smart performance develop, under the direction of Muireann Ahern and Carl Kennedy, as it reveals the playful logic and supple humour of its story, is to appreciate a show that leaves nothing unconsidered. (Even its show programme, a witty continuation of the performance by Kate Heffernan, is a work of art.)

That takes Hulme-Beaman, in an equally assured idiosyncratic performance, on an ebullient journey to meet an outrageous hairdresser, deprived of his scissors, an hilariously self-referential pizza chef, suddenly rendered saltless, and a doo-wop singing, mermaid-fixated fisherman, stranded without a paddle.

But the subtle surprise of Lovett’s script, is how it actually deals with loss. Whether that’s the absence of a sword or a parent, it stealthily suggests how self-reliance is born in deprivations, large and small, sketching emotional depths without ever yanking on your heartstrings.

Family audiences, Theatre Lovett understands, are sophisticated enough to deserve better. It’s a pure delight to share, and easily the best family entertainment onstage right now; a show that whips the charming jangle of its imagination into a rich, rewarding symphony.