The School Days of Thaddeus K review: An elegant depiction of a dismal time 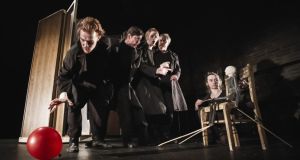 The School Days of Thaddeus K: the name of Blue Raincoat’s protagonist recalls the Polish director Tadeusz Kantor, whose seminal 1975 work The Dead Class made school a living hell

THE SCHOOL DAYS OF THADDEUS K

Factory Performance Space, Sligo
★★★☆☆
The new production from Blue Raincoat ought to ring a bell. It begins with one insistent toll, the call for school, which soon meets with another, lighter chime, the sounds becoming musical. The vulnerable figure of Thaddeus K, a small and slight puppet, wakes up each day on a heavy book, trudging to school up unforgivingly steep inclines. If he recalls somebody else, in both name and plight, it’s a gentle allusion to the Polish director Tadeusz Kantor, whose seminal 1975 work The Dead Class made school – and history – a living hell. Many artists could relate.

That certainly seems the case for Blue Raincoat, who pursue a similar track to Kantor, using puppetry to evoke the fragility of a young boy relentlessly imprinted with the numbing process of instruction. At school the child exists in a perplexed swirl of recitations, in which teachers laboriously explain the tuiseal ginideach (or genitive case), belabour the triumphs of Cúchulainn and enumerate the heroes of history. The kid finds succour in breaks, where a butterfly briefly alights on his hand, a paper boat becomes an adventurer’s hat, and a red balloon holds the promise of escape.

If the makers are revisiting their own formative years – publicity material makes the context of a national school in the 1970s more explicit than the action – the play’s director, Niall Henry, and dramaturge, Jocelyn Clark, seem also to be invoking Blue Raincoat’s own education. The ensemble manipulate the puppet with an engrossing reverence, recalling similar stately work in their recent Shackleton. A gallery of chattering teachers seem as relentlessly absurd as the cast of Alice in Wonderland. And the day-in, day-out struggle of Thaddeus, depicted unsparingly, becomes another model of unabashed repetition and sheer endurance. To put it another way, this learning experience feels like a grind.

One consequence for the isolated Thaddeus, voiceless and alone in his class, and imprinted with both our concerns and the cant of his teachers, is that he can never demonstrate much individuality. He is neither abused (in any overt sense) nor rebellious (in any obvious sense), and soon even the tender manipulations of this puppet, under the precise attentions of the ensemble, come to feel like a metaphor for indoctrination. Poor little Thaddeus: everyone pushes him around.

That ultimately makes for a very elegant depiction of one very dismal time, where scenes of stultifying repetition (which anyone will recognise) are choreographed with surprising sprightliness. Here the ensemble’s physical discipline makes objects such as a huge wardrobe or a hefty leabhar rolla (or roll book) become suddenly weightless, as though physics had met its match against daydreams, under the swooning strings of Joe Hunt’s sound design.

You admire such skills even while longing for the final bell, ready to leave these days behind even while appreciating all that the company has learnt.

Why do we have difficulty accepting the variety of gender expressions?

Tracy Chapman: ‘Being in the public eye is uncomfortable for me’