St Nicholas review: What does a theatre critic know anyway? 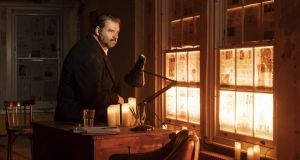 Smock Alley Theatre
★ ★ ★ ★
St Nicholas makes no appearance in Conor McPherson’s 1997 play, which gets its Irish premiere in this Donmar Warehouse production. But its unnamed narrator, played by Brendan Coyle, will bestow a gift on us: a moral fable that he hopes will bring us some transcendence.

Simon Evans, the director, begins the performance with the lights still up. Coyle rises to his feet to greet us, scattering rice in a rough circle at our feet – a ritual, we later learn, of protection. At intervals throughout the performance Coyle mingles among us, too, touching some of us lightly on the shoulder, in a gesture of reassurance or, perhaps, benediction.

The story he tells us is his own, and it is at once strange and familiar. A much-loathed and self-loathing theatre critic, he finds himself seduced by vampires – which, contrary to all myth and legend, bring him back to life. You see, as a failed artist feeding off the work of others, he was dead already. This encounter with forces larger than himself was just what he needed to shake the paralysis that has plagued him: finally he has a story to tell.

Peter McKintosh’s stage design offers the narrator a space as sanctuary. He might well be speaking from the supernatural refuge that the vampires offered: there’s his desk, the large windows, light blocked out by old newspapers, some of which, surely, contain his reviews. But he is also speaking to us from the theatre, as McPherson makes clear in several subtle gestures to the audience and an expert flourish in the final moments. McKintosh gives Coyle the freedom to move among us by blurring the lines between stage and seats, and he does so with bearish charm: the gift bestowed on him by his vampire friends.

There is still a hesitancy, however, about Evans’s production. Coyle’s low growl occasionally falters, while Christopher Shutt’s intrusive sound design takes us out of critical moments, rather than further into the story’s spell, as it strains to establish various settings. An unnecessary interval also depletes the dramatic tension, denying the slow creep of the changing atmosphere as our anti-hero comes under and is released from the vampire’s power.

These shortcomings make the play’s final moments, when Evans transforms the theatre into a cathedral for the soul, seem strained rather than earned. But what, McPherson asks us playfully, does a theatre critic know anyway?