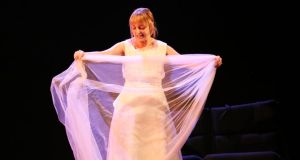 Draíocht, Blanchardstown
★ ★ ★ ★
This collaboration between theatre professionals and people in Dublin 15 offers  intimate glimpses into the lives of locals, sharing personal stories that would rarely be heard on stage. Under the guidance of Veronica Coburn, 30 theatre artists were matched with 30 residents of the area and invited to create short pieces that would be performed in their houses for their families and friends, and on the stage of Draíocht arts centre, in Blanchardstown.

Each night a selection of six shows gives a snapshot of the diversity of life in the area. In The World According to Richard, Sonya Kelly’s wry piece for Richard Dixon, an aid worker who travels the world with Concern, Dixon (played by Philip Judge, under the direction of Conall Morrison) observes that Tyrrelstown “is the most exotic place I’ve ever been”. For a man who who “has had the privilege of living among the four corners of the globe, it is a privilege to have the four corners of the globe living among me”.

They are also represented in the pieces selected for the first night’s performance: we meet a Nigerian businesswoman and an Indian student, as well as Dubliners native to the area and those displaced by “progressive” social-housing initiatives.

The staging is, by necessity, simple, and the form is exclusively that of the monologue. But the tone and subject matter vary greatly. Tom Swift imagines a digital avatar for Rucha Sohoni, in which his machine-loving subject can resolve the introverted and extroverted aspects of her personality. In We’re a Long Way from Home, for Jean Grey, Louise Lewis gives us a moving piece about life on the margins, and how inclusive projects like this one – indeed the theatre itself – can change participants’ lives.

In Linnets & Phibbles, Little John Nee stages a tribute concert for Oscar Hogan, in which he matches the 10-year-old’s wonder with his own inventiveness. Nancy Harris writes herself into Adaku Ezeudo’s stories in her culturally sensitive The Good Woman, while Elaine Murphy has the audience in stitches in Caroline’s Wedding, for Rose Emmet, which maps the changing landscape of Mulhuddart, as well as one woman’s relationship with her local champion of a mother.

Each of the pieces is excellent, as are the performances. But the only critics that matter, really, are the scores of people brought to the theatre for the first time by this innovative project.