Alice in Wonderland review: curious return to the past 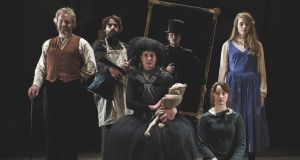 The cast “Alice in Wonderland”: for this revival, director Niall Henry pairs Alice (Miriam Needham) with an older version of herself (Hilary Bowen-Walsh), raising all kinds of conceptual ideas

In a year marked by official commemorations, it’s striking that the longest-standing independent theatre companies have chosen to pay some tribute to themselves. Druid and Rough Magic revived shows this year which are important to their respective canons; these are decisions that could seem either lacquered with nostalgia or determined to seek a new approach.

As Blue Raincoat rounds out its 25th anniversary with a return down the rabbit hole, it’s not easy to say what they are chasing.

This cast a fascinating light on the journey, making Dodgson both a tormented and tormenting figure, goaded by his own creations and narrating Alice’s ordeal. In foregrounding the ambiguity of that famous relationship between author and muse, the show divined an entertaining and uneasy sense behind this world of nonsense.

For this revival, director Niall Henry pairs Alice (Miriam Needham) with an older version of herself (Hilary Bowen-Walsh), raising all kinds of conceptual ideas, from the self-reference of this return journey to what seems like older Alice’s corroded self-regard. However, it also creates all kinds of staging problems.

These Alices are pretty much indistinguishable, both giving anxious acceleration to ever shoutier descriptions of a bewildering ordeal, resulting in an excruciating echo chamber. Curiouser and curiouser, says Alice, but you struggle to find a note of curiosity.

If Sandra O’Malley and John Carty are much more grounded, it may be because the two returning cast members are Wonderland natives: Carty as an agitated White Rabbit, floppy ears tucked neatly to one side under his bowler hat, and a serene Chesire Cat; O’Malley giving the Duchess and the Caterpillar a funereal solemnity.

There is more important continuity in the production, though, which is the conjuring of a vast imagination with modest means. The lights (uncredited) do this effectively, creating glowing pools or gloomy recesses around Paul O’Donnell’s sparse set, where the performers’ skilled command of motion allows visions to float or disappear, while Joe Hunt’s sound design, shivering or barrelling, suffers only from its over-presence.

This is a story explicitly concerned with growth – via potions, cakes, mushrooms or, more troublingly, time – which is never easy to contemplate. When the teller wonders how Alice, as a grown woman, will look back on Wonderland, Blue Raincoat inevitably asks the question of itself.

It’s hard to say what else they may have discovered by returning to Wonderland, unless it’s the realisation that you never leave.

Lewis Capaldi: ‘I’m not Justin Bieber or Ed Sheeran – I’m not getting chased down the street’
7