Back to the future: Rough Magic’s Joyce adaptation is our theatre highlight 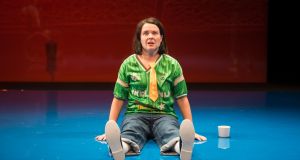 Deirdre Kinahan’s new play essentially begins with one anguished question: “What the fuck happened here tonight?” Moving backwards, Fishamble’s co-production with the Abbey must try and piece together this night, moving from tenderness to trauma, as a woman is brought face-to-face with her rapist from 25 years ago. Like the details around remembered trauma – alternately vivid and distended – the action of Kinahan’s play comes in slow, circuitous movements then sudden judders.

The play, like a mind in panic, begins to fragment, fluctuating between alternative paths. Should she confront him? What are the consequences of accusation, for her family, for him? Is it enough to tell the truth? This, appropriately, is not a drama of ambiguity – the play believes Sandra – but a depiction of the dilemma of coming forward. That it moves so strangely, through artificial motions and a set of impossible gloom is a consequence of both Sandra and the playwright running through different scenarios.

The grim consequences she imagines, though, are all too real: inadequate apology, a loss of marital trust, an indelible mark of victimhood. That’s not a great message to give to survivors of sexual assault, who have received precious few of them recently. But it is a compassionate imagining of one woman’s private torment and the vexed decision to keep it hidden.

A Portrait of the Artist as a Young Man

Here comes Stephen Dedalus, an awakening mind, hungry for learning and experience, soon affronted by the church, burning with indignation and full of loftier ambitions.

“I go to encounter for the millionth time the reality of experience,” he tells us in James Joyce’s debut novel, “and to forge in the smithy of my soul the uncreated conscience of my race.” If those are big words for a Dublin stripling, an exasperated Joyce tended to stress the last four words of his title – “as a young man” – when people strained to find artistic insights.

Nobody quite grows out of Joyce, though. His work has kept Irish theatre in a steady and bankable supply of material for adaptation, from Corn Exchange to the Abbey and now Rough Magic. Here, as the company reaches the end of its national tour, their new ensemble is set loose on Arthur Riordan’s energetic adaptation of Joyce’s coming-of-age story. The role of Stephen is passed between them, like a relay baton, while director Ronan Phelan finds correspondingly brisk and youthful iconography of a more recent Ireland – from Italia ’90 to contemporary pop songs – to accompany this journey from childhood into maturity. Maybe that bodes well for the conscience of Stephen’s race. The smithy of his soul is working overtime.