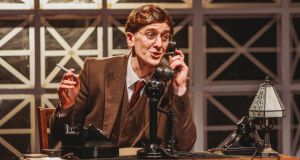 Peacock Theatre, Dublin
★★★☆☆
If the first casualty of war is truth, Thomas Kilroy’s 1986 play presents two of its most skilled assassins. “Ladies and gentlemen,” begins one of the actors, “this is the story of two men who invented themselves.” Indeed, two Irishmen who found themselves on opposing sides of the second World War, the effete Brendan Bracken and the splenetic William Joyce, they were linked by something more corrosive than the origins they betrayed.

Following in the footsteps of Wilde and Shaw, Bracken almost theatrically re-created himself as someone more English than the English, a print capitalist fluent in speech and charm, eventually becoming Churchill’s minister of information. Joyce, a peripatetic brawler, ultimately became better known as the Nazi propagandist Lord Haw-Haw, chipping away at British confidence with his own practiced performance on the wireless.

Both roles are performed by the handsomely severe Ian Toner, who makes Bracken a florid kind of fabulist and Joyce a stark, self-destructive villain. Although they hold the stage in two successive turns, video projections and radio broadcasts allow them some glancing exchanges.

To Bracken Joyce is a “filthy traitor with the vulgar voice”. To Joyce Bracken is a trickster who can “rise to the top”. We despise in others what we most dislike in ourselves.

This chillingly resonant coproduction between the Abbey and the Lyric, which, like Field Day’s original, premiered in the North and toured briskly to the Republic, finds another doubling, tracing echoes through time.

Kilroy’s cerebral biographies may delight in potent symbols: both famous speakers finally succumbed to complications of the throat – cancer in Bracken’s case, death by hanging in Joyce’s. But his driving inquiry is into the dreadful ends of nationalist rhetoric. Bracken is as susceptible to anti-Semitism as Joyce, repudiating the “other” for blanching Britain of its identity, as only an immigrant can. To hear such bile at a time of resurgent nativist populism, at home and abroad, is beyond disturbing.

Jimmy Fay’s direction matches the play’s dualities with noirish embellishments, as though blurring midwar suspicions with postwar gloom. The designer Ciaran Bagnall’s sparing art-deco frames allow the chiaroscuro effect of Paul Keogan’s lighting, throwing Toner’s profile into shadow to enhance an identity divided. Heavy with speech and static in motion, Kilroy’s writing better suits a radio play (which is how this piece began) but nevertheless emphasises the persuasive quality of sound and image, adeptly enriched by Neil O’Driscoll’s video and, best of all, Chris Warner’s soundscape.

Tormented by Lord Haw-Haw’s voice, Bracken at one point tears his radio apart, but the voice flits to other sources.

The grand irony of Joyce’s story – “American but also Irish”, as Sean Kearns explains, ably playing support roles; “he wanted to be English but had to settle on being German” – is that he was executed for treason, thus affirming his invented Englishness.

The unnerving thing about this timely revival, then, is how performance becomes reality. It concludes with a description of Haw-Haw’s audience, either roused or entertained into becoming the fascists he imagined. There, in the dark shadows of the past, lies not Bracken’s warped double, nor Joyce’s, but ours.