The Lyric Theatre at 50: a cultural bridge in a divided city

It opened its doors on the cusp of the Troubles, but Belfast’s Lyric has survived 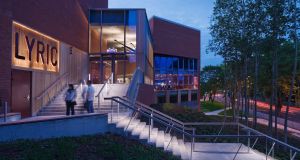 The Lyric Theatre in Belfast: ‘We were keen to imbue the new building with the spirit of the old,’ says Mark Carruthers

Belfast’s Lyric Theatre is 50 years old. What began as a personal crusade and grew into an important cultural movement is now one of Ireland’s leading full-time producing houses. The date of the official opening in 1968 was chosen by its founder Mary O’Malley as an homage to US president John F Kennedy’s famous Amherst address on October 26th, 1963, in which he affirmed the role of the artist in society.

In 1951, Cork-born O’Malley and her husband Pearse, a Belfast doctor, started putting on plays at their home, for their own enjoyment. The following year they moved to a larger house in Derryvolgie Avenue on the south side of the city and converted the stable loft into a studio theatre, which, in O’Malley’s words, “caters primarily for the Irish poet and writer”.

It became a gathering place for a group of exceptionally talented people, among them Sam and Joan McCready, John Hewitt, Louis Rolston, dancer Helen Lewis and artist Alice Berger-Hammerschlag. Under O’Malley’s direction, they regularly presented high-quality productions of Irish, English and European classics.

Actor, director and playwright Sam McCready, a former Lyric artistic director, remembers 1950s Belfast as a “cultural desert”. He says that his involvement with the Lyric Players opened up an oasis which, for the next 20 years, would become central to his life.

“In Northern Ireland schools, Irish literature stopped at the Border. Despite having had a thorough grounding in English literature, I knew nothing of Irish literature. I didn’t know there was a store of Irish mythology comparable to the rich mythologies of Europe. All that changed with Mary O’Malley and her poets’ theatre, which placed emphasis on speech, visual harmony of set and costume, and stylised movement.

“She employed leading painters and musicians, as well as the dancer and choreographer Helen Lewis, who had studied modern dance in Europe. That aesthetic became the leading influence in the work I have done in theatre ever since.”

The company steadily outgrew its little 50-seater studio and plans were hatched for a designated building where it could develop and grow. In 1960 the Lyric Players became a non-profit-making association, and fundraising began in earnest towards the construction of a modern 300-seat theatre on a site overlooking the River Lagan.

When other performance spaces in Belfast closed during the Troubles, the Lyric soldiered on, continuing its mission to provide a safe, neutral creative space in a deeply divided community.

Mary O'Malley never underestimated audiences. She believed that if you gave them quality, loyalty would follow

Over the past weekend, a symposium entitled Lyric@50 was organised by Queen’s University lecturer and Lyric board member Dr Mark Phelan. One of the round-table discussions focused on the cultural politics of 1968.

“When the Lyric moved to a new permanent home in Ridgeway Street, it opened its doors to a city on the cusp of a conflict that was to last for decades,” he says.

“The 50th anniversary offers an opportunity to re-examine the contemporary history and legacies of an era synonymous with civic activism and political protest, as well as to contextualise and reflect on the critical role played over the years by the Lyric across the civic and cultural life of Belfast.”

Paula McFetridge is the Lyric’s only female artistic director since O’Malley. During her tenure, from 2001 to 2006, she remained acutely conscious of the legacy she had inherited.

“Mary never underestimated audiences,” she says. “She believed that if you gave them quality, loyalty would follow. She wanted the Lyric to be politically neutral but totally inclusive. And she believed passionately in the mission to train young people.”

Leading stage and screen actors such as Adrian Dunbar, Conleth Hill, Richard Dormer, Michelle Fairleigh and Liam Neeson developed their early careers at the Lyric; plays by Martin Lynch and, later, Marie Jones successfully reached out into the wider community and pulled in new audiences.

New work tended to be considered a hard sell, to the chagrin of writers such as Graham Reid, Robin Glendinning, Gary Mitchell and Stewart Parker. More recently, however, new plays by, among others, Owen McCafferty, Abbie Spallen, Rosemary Jenkinson, David Ireland and Mitchell have found their way onto the Lyric stage. Last month, Glenn Patterson and Colin Carberry’s adaptation of their screenplay Good Vibrations proved one of the most successful productions in the theatre’s history.

Among this writer’s early personal highlights are the 1983 premiere of Christina Reid’s Tea in a China Cup with its working class take on British identity; in 1984, Stewart Parker’s groundbreaking Northern Star, with a powerful central performance by Gerard McSorley as Henry Joy McCracken; Stella McCusker’s delicate, brittle Blanche Dubois in A Streetcar Named Desire; Roland Jacquerello’s American trilogy, comprising The Iceman Cometh, After the Fall and Cat on a Hot Tin Roof.

By the early 1990s, serious structural cracks were beginning to show in the theatre’s fabric. After much public debate, a logistically complex, sharply focused fundraising campaign was launched, which culminated in the opening in 2011 of a handsome, award-winning building on the same riverside site.

BBC current affairs presenter Mark Carruthers joined the Lyric board in 2001 and served as chair from 2007 to 2015. Alongside former Queen’s University vice-chancellor and Lyric vice-chair Sir George Bain and director of development Angela McCloskey, he led the campaign to amass the estimated £18 million required for the new construction.

“I remember standing in Ridgeway Street watching the cranes pulling down the old building and thinking, ‘It’s down to us now,’” says Carruthers.

“We raised a total of £18.5 million and the final cost was £18.1 million. The new building was achieved on time, on budget, to specification and without compromise.

“We were adamant that it must have a second performance space, a rehearsal room, a bar, an education room and a comfortable green room and dressing rooms. Our overriding aim was to bring in new audiences, entertain people and show them that theatre matters.”

Carruthers says all concerned were equally committed to another important pledge.

“We were keen to imbue the new building with the spirit of the old. The Lyric was founded as a poets’ theatre and to that end we brought on board Seamus Heaney, Michael Longley and Brian Friel. Mary O’Malley’s bronze bust was installed in a prominent position, as was the original threshold stone with its quotation from Yeats. Seamus reworked his poem Peter Street at Bankside for the new threshold stone and Brian, who had had a difficult relationship with the Lyric, came to the opening ceremony and wrote his secular prayer for the occasion.

We’re permanently in a period of transition, developing opportunities for co-productions and touring

The theatre also had support from such well-known people as Adrian Dunbar, Conleth Hill, Ciarán Hinds, Marie Jones, Ian McElhinney, Simon Callow and Dan Gordon, says Carruthers, along with “our patron Liam Neeson, as well as from the artist Colin Davidson whose beautiful portraits animate the public areas”.

Jimmy Fay has been executive producer for the past 4½ years. A former literary director at the Abbey Theatre, he is steadily creating a vibrant, forward-looking environment at the Lyric, appealing to new constituencies and building go-ahead creative and administrative teams. Under Philip Crawford, head of creative learning, the Lyric Drama Studio is another success story, regularly sending aspiring young actors to drama conservatoires in the UK and Europe.

“Theatre is constantly evolving,” says Fay. “We’re permanently in a period of transition, developing opportunities for co-productions and touring. Legacy is important but so is the need to refresh and recycle. Some people think legacy is like china – you shouldn’t play with it too much in case it breaks.

“Our site here beside the Lagan remains a shared place, a crossroads between communities. I feel like we’re forever on that river, forever on the move. You’re steering the boat in the direction of the sea but the sea always remains a long way away.”