My Name Is Language review: A nicely shameless exercise in name-dropping 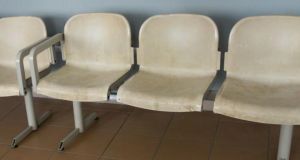 MY NAME IS LANGUAGE

Wood Quay Venue
★ ★ ★
What’s in a name, Shakespeare’s Juliet once wondered, hoping herself for a little leeway. Quite a lot, suggests this essayistic performance piece from the Dutch artist Nicoline van Harskamp, coproduced by Steirischer Herbst and Project Arts Centre. Taking place in an airless waiting room, where performers sit unrecognised among the audience, it ushers them into intriguing anecdotes and reflections on the politics of nomenclature around the world, a nicely shameless exercise in name-dropping.

In a playful act of simultaneous translation, the spoken text appears behind them on screens, with every name mentioned given its literal meaning. Fonxta (the One who Is Ready to Fight), whose Basque name was forbidden under Franco, speaks first. Successive speakers include a no-nonsense Polish births registrar, explaining international policies and amusing irregularities (an Irish baby named Cuervo, after a tequila brand important to his conception); an am-dram Brian Friel bore, well versed in Translations; an Indian woman alive to the brutal erasures of entirely renaming women after marriage in repressive cultures.

Despite the variety of speakers and an expanse of material, though, this feels like a single thesis divided among speakers, rather than differentiated. A more involving performance might hope to modulate that voice. Here, only the names have been changed.