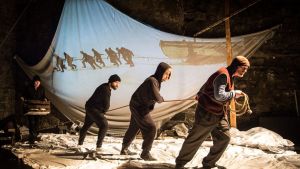 Most theatres, if they’re being honest, dream of setting sail. Even the inner workings of the stage spell it out in nautical terms: the overhead “rigging”, the tech “crews”. Beginning with the hoist of a sail, the first production to mark Blue Raincoat’s 25th anniversary builds on that adventurous affinity, and continues a theme that must resonate with a long-established physical-theatre ensemble: the challenges of sustained exploration.

Such spirit has drawn the Sligo company to stage versions of extraordinary real journeys, both ill-fated (The Strange Voyage of Donald Crowhurst) and out of this world (The First Cosmonaut). The story of Ernest Shackleton’s Endurance mission to cross the Antarctic offers both qualities: a blighted adventure in which the ship was crunched and swallowed by ice floes, and a staggering account of bravery when three men faced impossible odds to rescue their marooned crew. Almost any telling of the story will set your pulse racing.

This performance deliberately takes a much cooler approach. Developed with dramaturg Jocelyn Clarke, it is wordless (apart from an early projection of Shackleton’s enticing advertisement: “Men wanted for hazardous journey. Low wages, bitter cold . . . safe return doubtful.”) Instead, through sombre hypnotic movements, four performers manipulate replica models and malleable materials to give a blow-by-blow account of the adventure in miniature. White sheets, bundled up like icebergs, slowly unwrap to envelop a scale model of the Endurance as it becomes hopelessly stuck. The men retreat behind a tent-shaped screen as they set up camp in the ice, and cast looming silhouettes. Later the three escape boats, realised as bunraku puppets, and careen through the dark expanse of the theatre, hurled about by the polar waves.

It is a striking feat of composition; director Niall Henry works with Jamie Vartan’s malleable design, Barry McKinney’s sparing lights and Joe Hunt’s icily evocative blend of music, sound and projections to deliver a meditation on hardship. The play is fascinatingly uninterested in the thrills of the survival story. If Endurance was a testament to the human spirit, it is because when safe return was most doubtful, Shackleton himself still made jokes, or famously whooped with his rescue team on a makeshift toboggan – an event barely acknowledged here.

That’s clearly not the appeal for Blue Raincoat, which instead focuses on vignettes of numb perseverance, gruellingly depicted, such as Sandra O’Malley, John Carty, Brian Devaney and Barry Cullen helping each other through the crushing black folds of a glacier. It is as if the romance of exploration is not in tales of heroism or great feats, but in the collective determination to continue against the odds. Even the title is a bit of a feint; nothing actually individuates the men we see. That is where a long-standing theatre ensemble might meet an Antarctic expedition halfway; not because of similar hazards, wages and unlikely safe returns, but because they both know adventure and discovery is a full-time job.