Spotless review: characters in suburban thriller are defined by what divides them

In Gary Duggan’s play everyone has a partner in this world, whether known or not 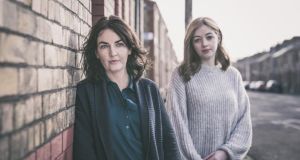 That they meet is a matter of convenience, but the two women will soon have something unsettling in common

Civic Theatre, Dublin
★★★☆☆
The two characters in Gary Duggan’s new play seem defined by what divides them. Genevieve (Ciara O’Callaghan), a middle-class Dubliner in her early 40s, has traded down and moved with her husband to a new house in the “almost inner city”. This bulwark of gentrification is in a tense stand off with the neighbouring flats of Gaffney Gardens, the home of Jenny (Emma Willis), an ambitious, young Leaving Cert student. Even architecture wants to keep them apart.

That they meet at all is, literally, a matter of convenience: Jen works in the local Spar, where Gen gets asked for ID buying a bottle of wine. But the two women will soon have something unsettling in common: a brazen local lothario named Dean. A shadowy figure, represented only in speech by the two actresses, Dean finds Jen at a flat party and soon seduces her, and later saves Gen from a mugging, and repeats his moves. When both affairs have a consequence, prompting two very different responses, Jen and Gen can seem like figures in a dark experiment: two versions of the same woman, spinning in different directions, and destined to meet again.

Segregation seems to be built into the play’s structure, told mostly in intercutting monologues or one-sided conversations, and physicalised in the production’s design. Naomi Faughnan’s set places each character on a parallel stage, a bedroom and a kitchen respectively, against similar Mondrian patterns of shattered tiles. When one inhabitant speaks, Kevin McFadden fills her space with light while plunging her counterpart into gloom.

Moving in short pendulum swings, the pace is serviceable, but stiff, as though director Aoife Spillane-Hinks’s staging for Rise Productions and Then This Theatre prefers to keep the elements discrete rather than have them dissolve.

There’s reason for this. Duggan plays with motifs of balance: tellingly, Jen’s favourite subject is accountancy, and even as the play braves new territory in relating one woman’s struggles with IVF treatment and another’s detailed, unregretted abortion in post-Repeal Ireland, it’s still possible to read their diverging fates as corresponding entries in some karmic ledger.

In isolation, the performances are less even. In Emma Willis’s persuasive and nuanced depiction, Jen is as believably hopeful as she is guarded. (“No one wants a bird with baggage,” she says of her family background.) Ciara O’Callaghan’s more impassive Gen tends to speak in the clipped, pronoun-shorn form of voice memos. “It’s like I’m drawn to the flaw,” she tells us early, which may explain her later morally ambiguous impulses. (“There’s some boldness in this one,” affirms Jen, who struggles more with her conscience.) But, as is the case with monologues, that is more a case of tell than show.

Still, one display is both arch and potent: Jen’s inherited superstition in saluting lone magpies: “Good morning, Mr Magpie,” she says in habit. “Where’s your wife?” Duggan’s play is a thriller of similarly chilly connections, where everyone has a partner in this world, whether spotted or not. The isolation may not make for as thrillingly dynamic a stage, but Jen and Gen seem destined to be alone together.