In Our Veins review: Story of good people in hard situation is pleasantly sentimental 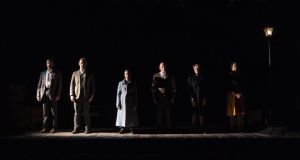 In Our Veins: Exhaustively told, but given charming performances and admirably quick motion. Photograph: Pat Redmond

Lee Coffey’s chronicle of working-class Dublin, centred on one dock worker’s lifetime, begins with words that would make a sailor blush: “Down the docks. Up the Monto,” announces a stark chorus of voices. “The worst slums in Europe. That’s where Dublin came from. Out of the shit and into the world.” Ewww. Where can you go from such septic origins?

For all the salty truths of life on Railway Street – once part of the biggest red light district in Europe – the play that follows is actually a much warmer and more sentimental affair. This is a story of good people in hard circumstances, exhaustively told, but given charming performances and admirably quick motion. Out of the grit and into the whirl.

Beginning with a funeral and doubling back over the better part of a century, the play covers a lot of ground over its 100 minutes. Coffey, who cut his teeth writing punchy action monologues, tends to write less in scenes than in clips – quick jabs of story and tight braids of dialogue where characters prefer toaddress us directly.

That unfussy relay of character and chapter makes a neat point: life is a series of changing roles

One happy consequence is that the narrative is shared between the ever-present ensemble: passed from Amilia Stewart’s Anne, one of the “unfortunate girls” of the Monto, to Jack Mullarkey’s Patrick, her abandoned son, raised by a kind local couple. As time passes, so do the parts: when Patrick reaches the age of his father (appealingly played by Ian Lloyd Anderson), Anderson takes over with satisfying symmetry; in turn, Gerard Byrne alleviates Anderson to play Patrick in his later years. His wife Esther takes possession of the story, introduced in a fetching performance from Aisling O’Mara, later passed to the assured Catherine Byrne. That unfussy relay of character and chapter makes a neat point: life is a series of changing roles.

Not everything is as supple. Commissioned by the Dublin Port Company, Coffey’s play for his company Bitter Like a Lemon and the Abbey Theatre is reverent to both history and its patron, including real legends of Monto and careful details of Docker society. These can bring illumination and texture to the show, like the fickle cruelties of notorious madame May Oblong, or the pivotal role of the pub and backhanders among casual labourers. But sometimes it impedes the show, as though pausing to point out something else found in research.

In a spry and economic production, director Maisie Lee won’t allow it to dawdle long, though, working with movement director Paula O’Reilly and Denis Clohessy’s subtle score to maintain an involving momentum. If characters don’t get the time or space to deepen over the course of this brisk century, they won’t detain you either. Even Patrick, given this extended eulogy, is not quite as vividly realised as a lament for obsolescence: the hard graft and rough competition of dock work is brusquely pushed aside by container ships and forklifts.

Fittingly, perhaps, the play owes something to both methods, bringing nimble composition to dutiful research. It moves with contemporary efficiency, but it has done the heavy lifting.

Runs until Saturday, April 20th. Tickets can be bought here