The trouble with polemicists, in David Ireland’s satire, is that they might mean what they say 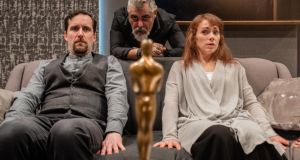 Abbey Theatre, Dublin
★★★☆☆
The worrying thing about polemicists inclined towards controversy is that they might just mean what they say. That’s certainly the case with the Oscar-winning Irish-American actor Jay Conway, whose thick white beard, sweeping ducktail hairstyle and general aura of brawny agitation suggest Wolverine in his later years.

Conway, preparing for a role in a new West End drama by a Northern Irish playwright, confronts his director very early with a hypothetical so troubling and off colour it might give Liam Neeson a breather: can rape ever be morally acceptable? And, if these two men had to (“gun to your head”), who, specifically, would they choose to rape?

Conway – an outright idiot who puts his misogynist conceit in a brace of flimsy parentheticals – believes he is being shocking with a higher purpose. Can the same be said of David Ireland, a playwright who has rarely shied from the grubbiest metaphors? “What kind of sick mind comes up with something like that?” Ruth, the playwright, asks later, in a play full of theatre send-ups, as though Ireland were briefly tempted to turn the gun of this splenetic satire on himself.

The dialogue, often acidly funny, is fuelled by patronising assumptions and ignorant misapprehension

The dialogue, often acidly funny, is fuelled by patronising assumptions and ignorant misapprehension. Robert Jack’s prissy English theatre director, Leigh, confuses James Baldwin for one of the actor siblings; Darrell D’Silva’s American blowhard believes the Bechdel test is the creation of a man; and Lucianne McEvoy’s working-class unionist defends her British identity against the actor’s obliviousness and the director’s indifference.

“Most real British people want nothing to do with them,” Leigh assures his star, conspiring to radically alter Ruth’s play without her consent. (It’s not the first time Ireland has used rape as an ugly metaphor for unionist fears, screwed against their will.)

In the Abbey and Traverse Theatre’s coproduction, designed by Becky Minto and directed by Gareth Nicholls for a smaller, pressure-cooker environment (it premiered at the Traverse Two studio last year), this is all played as an escalating farce; a farrago of mounting exasperations, violent eruptions, implausible ultimatums and, finally, wearying repetition. In performance, that feels like a flap of compensation for an idea that, even over 80 minutes, is fast losing steam.

Whatever about the Bechdel test, the play contains its own criteria for determining if a story is worthwhile: “Am I provoked?” asks the actor. “Does it make me think? Does it make me see the world in a new way?”

Two out of three ain’t bad, they say. But to jab so insistently at raw sensitivities, with finally so little consequence, isn’t quite good enough either.