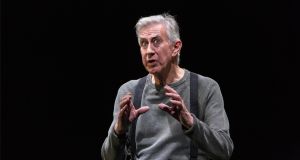 Actor Barry McGovern: he long resisted the label of “Beckettian actor”, but over the years has stopped protesting. “Now I just accept it graciously”

A few years ago the actor Barry McGovern made a brief visit to Co Antrim with the specific intention of dying there. It was a life-changing experience.

His agent had made contact with McGovern to say that the writers of a US television show shooting in Northern Ireland had written a small part for him. McGovern was sceptical. He was unfamiliar with the writers, knew nothing about the show, and anticipated schedule conflicts.

“It’s not my thing at all,” he tells me, having watched two episodes of Game of Thrones since.

Yet in the end McGovern found himself “sitting in the Larne mud” in a wet-suit, to guard against the cold, under the costume of a feudal farmer. Slumped against a stone wall, his character held his bleeding gut, waiting for the inevitable, while trading mordantly absurd remarks with two vagabond visitors.

“So why go on?” asked Arya Stark, one of the show’s regulars.

In the credits he is simply listed as “dying farmer”, but the script identified the character as Clamm, a playful allusion to the characters Hamm and Clov from Samuel Beckett’s Endgame.

The Game of Thrones show runners David Benioff and DB Weiss knew their stuff. They first met in Trinity College Dublin, in 1995, where Weiss was writing his thesis on Joyce and Benioff on Beckett, and saw McGovern performing I’ll Go On, his one-man performance based on Beckett’s Malone trilogy of novels.

That show, together with his saturnine Vladimir in Waiting For Godot, and his stark harried Clov in Endgame, may form the basis of McGovern’s reputation as the foremost interpreter of Beckett alive, a transfixing presence, as tall and thin as the author, with an expressive face that has become as pleasantly lined.

To devotees, McGovern’s appearance on a swords and sorcery show like Thrones was incongruous, like finding a truffle in a Big Mac. Yet McGovern can make a pleasing Beckettian association with almost anything.

“Beckett talks about his house in ‘the Marne mud’,” he smiles, “but I was in the Larne mud. That’s a good Beckettian reference. I never thought of that before.”

But over the years he has stopped protesting. “Now I just accept it graciously,” he smiles.

His command of the work – delivered in an ageless Dublin voice with a determined squint as though his intellect was irritated by existence but driven to continue nonetheless – has made Beckett’s stage work readable to new generations of theatre-goers. It has also helped to make Beckett’s prose works more stageable.

When we meet in a café near his home beside the Phoenix Park, McGovern had been walking the river bank running the lines of Watt. First staged in 2010 at the Gate Theatre, then toured internationally, McGovern’s adaptation of Beckett’s 1945 novel as a solo show is now returning to the stage, having been tweaked ever since.

That befits a novel that poses several challenges to any adaptor, and also tends to mount a bold defence against most readers.

“Have you read Watt?” asks McGovern, aware that its aversion to plot, deadpan philosophical humour, audacious repetitions and stylistic games can be a chore. “Good man.”

Written in the last years of the second World War, while Beckett and his partner Suzanne Dechevaux-Dumesnil hid from the Germans in Roussillon, it was Beckett’s last novel in English. He wrote it in the evenings “to keep himself from going insane”, McGovern says, with the soft chuckle of someone who knows that the work itself is far from hinged.

It follows Watt, an odd, alienated figure, who journeys to the home of Mr Knott, for whom he is to work as a servant, and who he never once encounters.

Across four non-chronological sections, Watt replaces an older servant, endures a visit from father and son piano-tuners, loses his mind in an institution, and doubles back to the railway station from where his earlier journey began.

The text is dotted with tiny incidents that become magnified to absurd degrees. A frog chorus outside Knott’s house, for instance, is conveyed in an extended two-page account of “Krak” “Krek” and “Krik”s. Later, in a peculiar state, Watt is disconcerted to believe that a pot in Mr Knott’s house is no longer a pot.

“Watt’s one of the worst,” McGovern says about the challenges of Beckett’s prose works, recently described by one critic as “more revered than read”.

He reconsiders. “Well, one of the funniest. It’s one of my favourite novels of his. But it is hard going...It’s about the whatness of existence.”

Like the book itself, Watt is a creature of logic and precision, however skewed, summoning to mind other characters in Beckett’s prose from Molloy to First Love. Those who detect a trace of autism in Beckett’s absorption in complex systems, either mathematical or musical, and his relative indifference to social interaction. don’t need to look very far: “Watt had watched people smile and thought he knew how it was done.”

“Obsession. That’s what I think it’s about,” McGovern says of the book.

Carefully treading a new narrative path, respectfully reassembled from the source, sacrificing moments that don’t translate to the stage while seizing those that do, McGovern’s undertaking resembles another kind of obsession. Is there something attractive in Watt’s subversively conveyed over-attention to detail?

“For me? Yes,” he says. “Because I suppose that tickles whatever my sense of funny is. It depends how far you push it, and bring it back. I’ve just taken the journey of Watt going to the house, serving on the ground floor, serving on the top floor. He is a kind of idiot savant, wise but innocent.

“And yet we all recognise in these parables of Beckett, shall we say, things of ourselves. A metaphor for things we do in our own peculiar way. The characters are outsiders. As Beckett was, in a way.”

McGovern met Beckett six times in the last years of Beckett’s life, first in 1986 while working on I’ll Go On, which Beckett had all but sanctioned. (In a letter to Michael Colgan, on the trouble of arranging a new production of Jack MacGowran’s Beginning to End, Beckett wrote that the possibility existed for a new show, with a different title, drawn from other works. “A nod’s as good as a wink to a blind horse,” says McGovern.)

McGovern and Colgan met Beckett in a hotel that the writer preferred for its anonymity close to his apartment in Paris.

“It was remarkable,” McGovern remembers. “A strange experience, because it’s like meeting Shakespeare or Joyce. But he put us at our ease. He had no small talk. If he had something to say, he’d say it. But then he would come out with a very witty remark. One had heard by legend that you didn’t ask him questions about his work. And I’m awfully sorry I didn’t ask him more. I did ask him certain things. I asked him how ‘Clov’ was pronounced in Endgame. He said, ‘Clove, clove: ham and clove’. I’d heard ‘clohv’ so often.”

Beckett elaborated on another question, though: Hamm did indeed allude to a hammer, and the three characters to nails. “No symbols where none intended,” adds McGovern.

Those are the final words of Watt, and also a favourite instruction of Beckett’s to any interpreters of his existentially goading work.

But what of those symbols that are intended and slip by the uninitiated? Here McGovern and his elucidating performances can be of immense help.

He pulls out a pristine first edition copy of Watt, with the “awful magenta cover” that Beckett complained about, which bears an inscription by its previous owner, the legendary critic and Beckett scholar Vivian Mercier. McGovern turns to the page in which a choir is represented in sheet music to point out a buried joke – the grumbling of the bass singer.

“People have misunderstood what these are,” he says, pointing out random curses. “It’s obvious he’s run out of breath, and is saying ‘oh fuck’!” With his director Tom Creed, McGovern made a new recording of the music with a choir, giving them detailed instructions on how to lift it from the page. The scene is now placed judiciously midway through the performance to break up the journey for the audience.

Not for the first time McGovern becomes animated by the memory of teasing out the joke with the choir, as absorbed in it and wryly enthusing wry as that dying farmer Clamm seemed in the Larne mud.

His instruction to the choir could double as an invitation to the audience. “We told them, ‘there is a weird, nerdy logic to this. Don’t worry. Just do it’.”

McGovern grins. “And they did it.”

Watt runs from April 9th-13th at Project Arts Centre, and April 17th-20th at the Pavilion Theatre in Dún Laoghaire