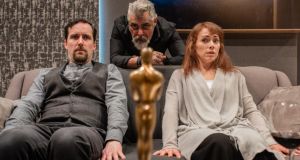 Ulster American
Abbey Theatre, Dublin. Until April 20th
The worrying thing about polemicists is that they might just mean what they say. Take Oscar-winning Irish-American actor Jay Conway, aggressively enthusiastic if very lightly informed about his upcoming role in a West End drama by a Northern Irish playwright. Launching into a hypothetical so tactless and tasteless it might finally take the heat off Liam Neeson – can rape ever be morally acceptable? And who (“gun to your head”) would he and his director choose to rape? – the idiotic Conway believes that he is being shocking with a higher purpose. Is the same true of Ulster American playwright David Ireland?

A controversy-addict who has rarely shied from grubby metaphors for extreme polemics, his satire on power dynamics, unpalatable politics and various hypocrisies, takes in everything from theatre to Brexit, as the two men conspire to alter the playwright’s proudly loyalist work without her consent. The Abbey and Traverse Theatre’s coproduction is played as an escalating farce; a farrago of mounting exasperations, violent eruptions, implausible ultimatums and, finally, wearying repetition, as though in compensation for an provocative idea that, even over 80 minutes, is fast losing steam.

Spotless
Smock Alley Theatre, Dublin
April 22nd-27th. Also: Hawkswell Theatre, Sligo May 1st; Town Hall Theatre, Galway May 2nd; Everyman Theatre, Cork May 7th-9th
Titles can be deceptive which is why a new play called Spotless by the playwright Gary Duggan arouses immediate suspicion. A writer of plays full of grit and games, he seems unlikely to produce anything squeaky clean His new drama, a suburban thriller, features Genevieve, a middle-aged woman concerned about her diminishing chances to have children, who moves from an affluent suburb to a more frugal new home adjoining a grim block of flats. Here she encounters Jenny, a teenage resident of those flats, hoping to find her way elsewhere though determination, focus and a good result in her forthcoming Leaving Cert. Their lives come together in unexpected ways, though, when a compelling but elusive local lad becomes a mystery for both of them, with life-changing consequences in a thriller with high stakes. Aoife Spillane-Hinks directs Ciara O’Callaghan and Emma Willis in the new drama for Rise Productions, undertaking a national tour. One thing’s for sure: Nobody is going to come out of this clean.