Dublin Will Show You How review: A portrait of isolation, division and despair

Tracy Martin’s play, based on real women’s experiences, can arouse pity, resistance, anger or a numb sense of helplessness 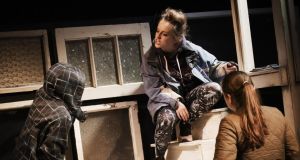 Dublin Will Show You How: the play’s existence is a more positive outcome of collaboration than anything it depicts

DUBLIN WILL SHOW YOU HOW

Peacock stage, Abbey Theatre, Dublin
★★★☆☆
How does a young woman end up living on the streets? How does a young man decide to take his own life? How does an abused wife stay with a thuggish husband; a recovering addict lose access to her kids; or the youth of the inner city give up hope? A portrait of isolation, division and deep despair, Dublin Will Show You How provides us with some very grim answers.

This coproduction between the Abbey Theatre and the Complex arts centre, in Smithfield in Dublin, grew out of a programme for women from the north inner city called the Browbeating Project. There, in a frank exchange about the vicious cycle of poverty, debt, addiction and criminal coercion, the women gave free expression to something long intimidated into silence. As the producer Phil Kingston puts it in a programme note, “it is still dangerous for many of our collaborators to be identified.”

Thus the stories of the vulnerable provide the basis for Tracy Martin’s play, a drama of risk that also shows how a sense of abandonment and distrust can makes communities become more sclerotic still. One character, for instance, recalls the residents of her flat raining down abuse on DSPCA rescuers: “No one had an issue with the dog. But nobody likes a rat.” That makes the contributors to the play seem all the braver for speaking out.

Josie, young, homeless and addicted to heroin, narrates in a staccato poetry: ‘The click of the lighter. The pop of the pack. The rustle of the tinfoil. Never going back’

As though to physicalise social division, Sarah Jane Foley splits the audience into two sides of her sparing, traverse stage, where seven performers play multiple characters.

Karen Ardiff, a late but assured replacement for an unavailable cast member, plays Tina, separated from her younger children and concerned for her eldest, Thommas Kane Byrne’s would-be rapper, James. Denise McCormack’s Joan, who addresses us largely in monologues, is the stunned and grieving mother to a son who apparently died by suicide. But if the show has a central figure it’s Liz Fitzgibbon’s Josie, young, homeless and addicted to heroin, who narrates in a staccato poetry: “The click of the lighter. The pop of the pack. The rustle of the tinfoil. Never going back.”

Fitzgibbon also plays Marie, the intimidated and abused wife of another hoodlum (Luke Griffin), who must sit motionless onstage, for a number of scenes that don’t involve her, covered with a freshly smashed egg. Martin pursues a range of devices, from verse to a video-assisted chorus of seagulls. But with so little fight in it otherwise, that makes the play, within the “warehouse aesthetic” of the director Vanessa Fielding’s staging, a sustained depiction of victimhood.

The consequence is that the show can arouse pity, resistance, anger or a numb sense of helplessness. Respecting the women involved, the play resists any glib answers or bogus uplift. (The play’s existence is a more positive outcome of honest collaboration than anything it depicts.) In matters of suffering, Dublin will show you how. Now what is Dublin going to do about it?