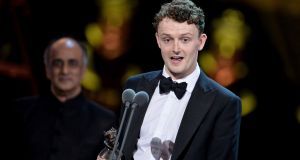 Chris Walley accepts the Best Actor In A Supporting Role award for The Lieutenant Of Inishmore on stage during The Olivier Awards in London, England. Photograph: Jeff Spicer/Getty Images.

Young offenders star Chris Walley has won an Olivier award for his work in Martin McDonagh’s The Lieutenant of Inishmore which ran in the West End last year.

Mr Walley (24) grew up in Glanmire on the outskirts of Cork city. He started taking drama classes when he was just eight years old.

Chris performed in plays at the National Youth Theatre and was active in the Gaiety Theatre and Cork School of Music.

Chris earned a place in RADA and was one of just 28 people to gain entry from over 3,500 applicants.

He scooped a win in the Best Actor in a Supporting Role category for his depiction of Davey in McDonagh’s play where he acted alongside Aidan Turner, Charlie Murphy and Denis Conway.

Prior to the production he said that receiving a part in the play was a “dream come true.”

“To have this happen in the same year as the Young Offenders TV show is broadcast is really something else. To be able to play two such different characters in the space of twelve months is very exciting.”

Walley was joined in the best supporting actor category at the Olivier awards by Keir Charles for Quiz, Adam Gillen for Killer Joe, Adrian Lukis for The Price and Malcolm Sinclair for Pressure.

TV guide: 23 of the best shows to watch this week, starting tonight